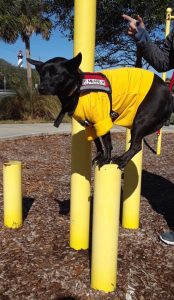 You may have seen them on our Facebook page in the comments section – if you haven’t you’re definitely missing out.

Not only do they do tricks, but they’re therapy dogs too.

McShane, a first grade teacher and Publix employee, rescued all three pups and enrolled them in The GO TEAM Therapy Dogs training.

“My family has always loved animals and I’ve always grown up with animals,” said McShane. “Thanks to Shadow, we had to venture into dog training and our dog training group is linked to a therapy dog group.”

Being the animal lover that she is, it’s hard for McShane to pass up a pup with potential. Shadow, McShane’s eldest, was adopted after Shadow’s owner passed away. Needless to say, Shadow was a little moody at first.

“He wasn’t fond of people or other dogs or much of anything. He used to be super aggressive and possessive. Now, thanks to great training, he is at least 9 years old, a certified therapy dog, a trick dog, fat and happy,” said McShane.

“The GO TEAM Therapy Dogs program is a nationwide program that is dedicated to placing well-trained, certified therapy dog teams in programs that provide comfort and caring through a canine-human bond,” according to their website.

“As we continued to become more and more involved [with the chapter], we learned about the trick dog tests. I liked it all so much I became a CGC [Canine Good Citizen] Evaluator,” said McShane. “It’s such a difference what a well-trained dog can do – so we love showcasing that!”

Bella is a seven-year-old intermediate trick dog. Her favorite trick is “placing” on various objects, according to McShane. Placing involves your dog sitting and placing their front legs onto a prop before dropping their head.

“Bella also has a huge amount of confidence,” said McShane, “and after some support she has learned to jump on/off on her own.”

Rex on the other hand is brand new to training.

“Due to his previous background, he needed lots of obedience work, adjusting, and confidence boosters,” explained McShane. “Rex recently passed his therapy dog test in March and will be pursuing Trick Dog titles when arrangements can be made around COVID-19 restrictions.”

Although passing therapy dog testing isn’t a requirement to become a trick dog, it does have its benefits. According to the American Kennel Club’s trick dog checklist, a pup who has previously earned their CGC only has to complete five tricks, instead of ten, to be considered a “novice” trickster.