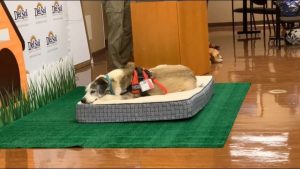 During Friday’s ceremony, he was gifted several retirement gifts including a giant dog bed and a basket of snacks. He quickly made use of his dog bed, relaxing during the duration of the ceremony.

His replacement, Coco, was officially initiated into the hospital’s family during a “passing of the bandana” ceremony.