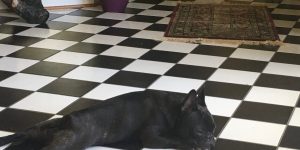 As a college student, it is common to desire extra sleep. But for a college student struggling with chronic depression, it is hard to wake up and deal with reality. Vanilla Bean is one student’s motivation.

Bean is a one-year-old short-haired black French Bulldog and an emotional support animal. Every morning this small companion is the reason that Leigh Ann Ordonez ’21 gets out of bed to start her day.

At home, Ordonez had an older dog that acted as her emotional support animal: “I had her since eighth grade and that was peak depression hours before I was medicated; it was really bad. But she was a very steady thing in my life.” After her older dog passed away, Ordonez went through Disability Support Services, got permission, and completed all required paperwork to permit an emotional support animal on campus. Ordonez adopted Bean her sophomore year of college.

Even when Ordonez struggles with her mental health, Bean is always there to help. Animal companions help to create a sense of support which helps create resilience, according to Dr. Jeffrey Lating, a licensed psychologist and a professor at Loyola.

“One of the best behavioral ways to help cope with depression is to stay active, so having an animal companion, particularly a dog that requires walking, is good exercise for the person and the dog.”

Ordonez confirmed that there is a stigma around emotional support animals. “A lot of kids will see me with Bean and they’ll be like ‘oh, I wish I had my dog on campus,’ but the reality is that I have her because I’ve been struggling for years with depression.” Marcia Wiedefeld, Director of Disability Support Services, said that the biggest impact from emotional support animals is relieving stress and lifting depression.

Wiedefeld said that it’s not only beneficial to those struggling with their mental health, but for those with chronic conditions as well. Overall, emotional support animals positively impact Loyola students who might need them. “It’s having the responsibility to help students with mental health conditions that they might be grappling with,” said Wiedefeld.

No matter what, Bean is always there to support Ordonez, from when she wakes up in the morning to her return from class.

“If I am ever alone, I am not alone because I have this thing, so that’s nice,” Ordonez said.