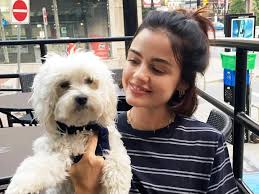 Lucy Hale believes she knew her dog Elvis in a previous life because they are “entirely too connected”.

The Pretty Little Liars star adopted the Maltipoo in June 2016 and the canine has become so famous that he even has his own Instagram account. And in an “Ask Me Anything” video interview with Elle U.S., Lucy made the surprising admission that she believes she and Elvis were somehow connected in a past life.

In response to the request to complete the sentence, “In my past life I was…”, Lucy replied: “Absolutely in my dog Elvis’ life. I don’t know if I was his owner, or if he was my owner, or if we were friends. I totally believe in reincarnation and I know for a fact that I’ve known Elvis in a life before because we are just entirely too connected – he’s the best.”

The 30-year-old actress has been in lockdown with Elvis, who she considers her “emotional support dog”, during the coronavirus pandemic, and she “simply doesn’t know” what she would have done if she didn’t have her dog to keep her company during these unprecedented times.

And while she’s thinking about getting another pooch to keep Elvis company, she isn’t sure whether or not to make the leap.

“I’m thinking about possibly getting another one. But I just don’t know how I could love another dog as much as I love him. It just doesn’t seem possible,” she grinned.