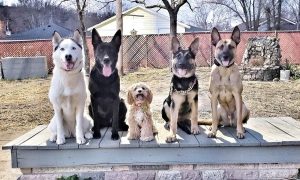 For Shannon Thurston, dogs have been part of her life since she was brought home from the hospital as a newborn back in 1970.

Her family dog, a German shepherd named Bobo, was by her side every day until he died when Thurston was 6. He taught her about friendship and unconditional love, she said.

When she was a young adult with an apartment of her own, a Siberian husky she named Kodie came into Thurston’s life. It didn’t go well at first.

“He made me cry every day for the first two years of his life because he destroyed everything,” she said. “I didn’t have the knowledge to train him or the resources to go out and get help from a trainer.”

The dog chewed her couch cushions and when he was done with those, he chewed the couch down to the wood frame.

“I had him for 14 years and he ended up being the best boy but those first two years were pretty rough,” Thurston said. She ended up moving to a place with more room and a fenced yard. She also learned the importance of exercise for dogs, the physical and mental kind.

Every dog needs a job, Thurston explained. That might be a challenging heel walk around the back yard. They need a sense of purpose and achievement, she said.

Today, this Maryville native, 1988 graduate of Maryville High School and Middle Tennessee State University graduate lives in Knoxville and is a certified professional dog trainer. She has been training other people’s dogs since April 2015.

“I can identify a lot with my clients who are at their wit’s end, asking me to help them with their dog who is destroying everything,” Thurston said.

As a head trainer at Off Leash K9 Training in Knoxville, her specialty is basic obedience — helping families get their dogs under control. But even before she took this job, this dog lover spent years rescuing dogs, first mainly those she would find along the side of the road. Then, she hooked up with rescue organizations mainly up north.

“In my 30s, I started working strictly with German shepherd rescues,” she said. “I did that for 14 years prior to becoming a dog trainer.”

A life-altering moment came back in 2007, Thurston recalled. She was sitting at her computer in Knoxville and saw a heartbreaking photograph of two German shepherds who were hours from being euthanized at a shelter in Murfreesboro. She called her boss and told her she had to take tomorrow off. Her boss agreed.

“I drove to Murfreesboro with no plan,” Thurston said. “I had no idea what I was doing. One of the dogs I had to pick up and carry, she was so weak. One had part of their foot cut off in a trap. One had gotten an elbow caught in a trap. It was really pitiful.”

Thurston began working for a rescue, which meant she was driving to multiple states to pick up the dogs and transport them to safe and loving environments. She would drive to Florida, Georgia and over to Memphis.

“It really is about strangers moving mountains to save one dog,” Thurston said. She said she can point out locations along Interstate 75 where she would meet other rescuers who would take the animal she had in her car further up the road.

But when she became a full-time trainer, Thurston gave up her dog rescue efforts. She didn’t want rescue dogs and dogs-in-training to have to coexist at her home.

After college and before Thurston became a dog trainer, she was a social worker, first for the state Department of Children’s Services and then as a special needs adoption coordinator for a private company. She was rescuing dogs all the while. She said she has now switched to rescuing cats through the organization Feral Feline Friends.

“I still look for ways to give back,” she said.

In addition to dog obedience training, Thurston also trains therapy and service dogs. Training is specific to the needs of the family or individual. People ask her to train a dog to chase down their autistic child who runs away or they need a dog that is diabetic alert. A majority of her work, she said, is with psychiatric support for people with post-traumatic stress disorder, anxiety or depression.

The dogs Thurston trains are required to go through American Kennel Club’s canine good citizen certification program. They have to pass a service dog evaluation, which involves a checklist of behaviors.

Those two German shepherds started her years in rescue. Thurston adopted one of them and the other was taken in by someone else. Thurston had her dog, Ruth, for 13 years. It passed away last year.

“That was a pivotal moment in my life,” this trainer said. “It changed the whole direction and course of my life.”

In many cases, Thurston is able to work with the individual’s own dog; other times she has to search to find one that’s the perfect match. That might mean visiting local animal shelters.

Off Leash K9 Training had its first facility in Alcoa. It outgrew its small space across from New Midland Plaza. The present location is near the post office at Middlebrook and Wisegarber in Knoxville. Classes are held there. In addition, trainers like Thurston often take dogs home for more intensive two-week training.

“Some people’s work schedules prevent them from doing the daily required exercises,” Thurston said. “We do all the work for them. They send the dog to us for two weeks and we take them to different environments and teach them all the commands. We take them to public places with distractions like other dogs and children. At the end of the two weeks, we do turnover to the families.”