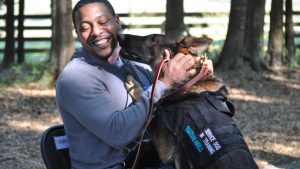 Are you a veteran or do you know someone who is a veteran and would be interested in a medical service dog?

Guardian Angels Medical Service Dogs mission is to raise, train and donate medical service dogs to veterans, first responders and individuals to mitigate the challenges of both permanent visible and invisible disabilities.

The program reports it has had zero deaths by suicide among its recipients in its 10-year history compared to a devastatingly high statistic for veterans around the country – on average 20-22 veterans commit suicide in the United States each day.

The nonprofit reported 92 percent of veterans with PTSD have reduced or eliminated medications after receiving a service dog (*According Medicine Study.)

Although Guardian Angels is headquartered in Florida, the organization has donated over 330 dogs spanning 24 states in the past decade.