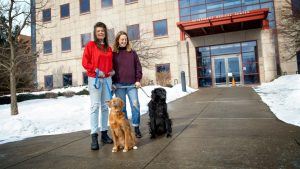 It’s been a year since Brooklyn-based hair artist and salon owner Chelsey Pickthorn learned that, after having beaten triple-negative breast cancer, an especially aggressive form of the disease, it had returned and spread to other parts of her body.

She sought out a new oncologist who – through the use of precision medicine, including sequencing the tumor’s DNA – would determine the best course of treatment. With targeted therapy and significant changes to her diet, the new tumors are shrinking dramatically. It’s a true achievement against such an aggressive disease.

Now, Pickthorn’s dogs are joining her in the fight. They’re participating in research at Cornell to expand the potential of precision medicine for canine and human patients. Dr. Jan Krumsiek, assistant professor of physiology and biophysics at Weill Cornell Medicine, is partnering with Dr. Marta Castelhano, director of the Cornell Veterinary Biobank, to study a type of lymphoma that frequently occurs in humans and dogs.

They’re looking at the tumor’s metabolism. By analyzing blood samples from healthy dogs including Pickthorn’s, as well as dogs diagnosed with lymphoma, the researchers will look for similar metabolic changes that also occur in human lymphoma cases. These similarities can help establish dogs as a model for studying human cancers, which the researchers hope will lead to better testing and treatment options for both species.

Dogs are an excellent species for the study of human cancer, because they share the same environment as humans. And they develop cancer quickly due to their shorter lifespan, which accelerates the pace of the research.

“The missing piece for learning about a specific disease could be sitting on your couch or sleeping in your bed,” says Castelhano, “and we are not really taking advantage of the power of this model.”

The model may also result in more effective treatments for canine cancer, which have lagged behind human therapies. “If you learn something about human cancer, maybe we can also apply it to our canine companions, and help them live longer, healthier lives,” says Krumsiek.

The collaboration began in fall 2019 at a conference at Weill Cornell Medicine’s Englander Institute for Precision Medicine. He studies metabolic changes in the body for diseases like Alzheimer’s, cancer and diabetes using a technique called metabolomics. It involves identifying and measuring the levels of thousands of metabolites – substances that result from metabolic processes in cells and organs – and analyzing how the levels change in response to disease.

With 14 years of experience in biobanking, Castelhano was eager to learn how Cornell’s biobank could contribute to this new area of research, and impact the lives of precision medicine patients.

Castelhano uses high-quality samples from veterinary patients to translate clinical findings into research innovations. Those samples are carefully curated by Castelhano and her team at the biobank – the first in the world to receive accreditation to an international standard for biobanks. Castelhano’s banked blood samples from sick and healthy canines provided the perfect opportunity to study the metabolomics of diseases shared by humans and dogs.

Castelhano and Krumsiek focus on diffuse large B-cell lymphoma (DLBCL), to advance research established by Dr. Kristy Richards ’90; she was an oncologist at Weill Cornell Medicine and the College of Veterinary Medicine, and a colleague and friend of Castelhano. She was also a pioneer in translational research, comparing canine and human lymphoma to find new diagnostics and treatments, until her death from triple negative breast cancer in 2019.

DLBCL is the most common type of non-Hodgkin’s lymphoma and creates similar symptoms in humans and dogs. Using metabolomic data from healthy dogs and ones with DLBCL, Krumsiek is looking for metabolic changes caused by the cancer that show up in the blood. If these same changes occur in people with DLBCL, then dogs could be an effective model for studying the human form of the cancer, and for identifying targets for new drugs for both species.

Unleashing the power of banked samples

Pickthorn became involved with the project when Castelhano discovered that she was a survivor of triple-negative breast cancer, and visited her salon. In February, Pickthorn and her two dogs, Hudson and Noma, attended a seminar Krumsiek gave on this work, titled “Metabolomics: From Pathogenesis to Precision Medicine,” at the College of Veterinary Medicine. Pickthorn and her dogs also visited the Cornell University Hospital for Animals, where the biobank clinical team collected a blood sample, which was labeled, entered into the biobank’s database, processed and carefully stored in a freezer.

“Hudson and Noma were treated so nicely and felt really comfortable. It was really cool to be a part of it,” says Pickthorn, who also has offered to donate her own blood to the human biobank at Weill Cornell Medicine.

The future of precision medicine

If the project is successful, it may one day allow oncologists to use a patient’s metabolic profile – as well the DNA of the tumor – to design a precision medicine treatment plan. Genetic data shows what mutations a tumor has, but metabolomics reveal what is actually happening inside the cells.

And while the researchers are starting with lymphoma, a metabolomics approach could be applied to any cancer or disease sample in the biobank.

“Biobanks are the core of precision medicine,” Castelhano says. “Every contribution to a biobank could improve your own health and advance precision medicine research, which may impact the lives of many other patients.”

Pickthorn was especially grateful for the precision medicine she received to treat her metastatic cancer. The mutations it uncovered qualified her for a clinical trial using a drug approved by the Food and Drug Administration, which has yielded promising results. She also credits a healthier lifestyle and a diet of whole and plant-based foods.

“I made a commitment almost exactly a year ago, shortly after my diagnosis, that I was going to be in the 1% that lived past five years or 10 years or 15 years,” Pickthorn says. “I’m very optimistic.”