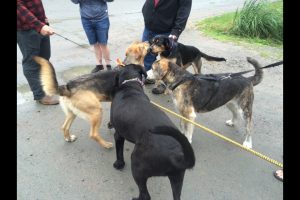 Last August 11 puppies were found abandoned near a dumpster in North Bay and brought to the North Bay Humane Society. What a difference a year makes.

Darlene Sacher of Best Care Kennel who adopted one of the dogs reached out to the other adoptive families inviting them to celebrate their first birthday with a party at the community dog park at Champlain Park.

Of the half dozen or so dogs able to make the party, it was clear from how hard they played with each other, tails constantly wagging, that they are thriving despite their rough start to life.

“We all are friends on Facebook. We created a group called ‘The Dumpster Dogs 11’ and we changed it to ‘Miracle Puppies.’ We’re all friends and we talk regularly about the dogs,” Sacher said.

“Most of the dogs have met. There is maybe two or three who have not met but most of them are best buddies. It is a community now. These dogs are amazing. They have an amazing temperament. Everybody loves their dog.”

When she initially heard their tragic story, she knew without question that she wanted to foster one of the animals.

“We had lost our dog of 12 years the month prior. It was a sad month and we just weren’t in the market for a dog. But August rolled around and I read the story about these abandoned dogs and I wanted to help by fostering one,” Sacher explained.

“Sully grew on us and he never left. Sully is my third rescue. You’re giving an animal a chance at life when you rescue them. Sully is a superstar. He does obedience and he does tricks. He’s a good boy.”

Yvon Albert adopted the dog’s mom which he named Shay, without knowing her backstory.

“I didn’t even know about the story until we had adopted her. She is the smaller of the bunch. Her papers say she is an Alaskan Husky mix.  Her temperament when we first met her was great. We went to the Humane Society with a three-year-old and she seemed to like kids. We knew we were going to keep her. She gets along with all of us and our cat too. She’s a big suck. She always has to press herself against you,” laughed Albert.

“She has met six of the dogs so far and they all seem to get along.”

“When we found out the puppies were dumped and the Humane Society was looking for volunteers, I phoned right away to help out. At that point, I had just lost my pet rabbit and I was devastated. I said maybe it is time to give another pet a chance because my previous pet was a rescue,” said Demers.

“I found out the day they went online for adoption and I just went there. I couldn’t wait to get one. My daughter picked him because I couldn’t make up my mind. They were all adorable. She felt he was meant for us. We were looking for a gentle one and the Humane Society said he was quiet and gentle. I want him to be a service dog at some point.” Joey has been a positive addition to her family.

“It is like being a mom again because my two kids are 22 and 19 and it is like starting with a toddler. There is not enough words to say how much we love him.”

“I was in the office and somebody came into the shelter and they had a box full of newborn puppies just hours old based on the fact they still had their umbilical cords and their eyes were closed. We sprang into action right away,” Cullin recalled.

“We put out a notice on Facebook that we were looking for a nursing mom for the puppies and we got outreach from all over Ontario. We had over 200-thousand people who viewed the post. People offered all kinds of support in terms of food and offers to foster and adopt.”

The puppies were initially bottle-fed.

”We had them for 48 to 72 hours before we were able to get them back with a nursing mom. We were providing 24-hour services for these puppies with hourly feedings. We had foster families step forward. We had volunteers and we had staff members that were working all night for the first couple of days just trying to make sure they were cared for.”

It can be a difficult process matching puppies with a nursing mom.

“There has to be a connection and the nursing mom has to be willing. The post ended up getting back to the original owner and they brought the mom forward and surrendered her,” added shelter manager Janet Bredin.

Bredin was pleased to see how the dogs interacted in such a playful manner.

“A lot of them are bigger than we expected, so it is nice to see them all back together,” grinned Bredin.

“It really shows why we do what we do. It keeps your shoulders broad and the smile on your face. No matter how hard the days get, you always get adopters that come back and want to share their progress; the happiness, and the many good stories.  So, it is really nice to see these dogs coming back happy and healthy.”

The shelter manager stressed that there is always an alternative to dumping unwanted pets or a pet the owner can no longer afford to feed.

“The North Bay Humane Society has always been very confident in saying we don’t want to leave anybody out there stranded. So, if they’re having trouble for whatever reason and they can’t care for the animal, contact us first,” said Bredin.

“These puppies could have potentially died. It is really important for people to ask for help versus just leaving them on the street somewhere.”