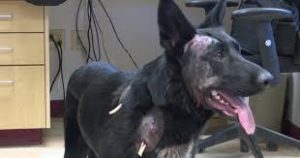 On Thursday we brought you the story of a veteran’s service dog who had gone missing and was found four days later with gunshot wounds. The dog survived and was reunited with his owner this weekend.

For local veteran Tony Eadus, his dog Lucca, is more than just a pet.

“Lucca just keeps me calm and takes care of me,” said Eadus. “And when I start getting all anxious and stuff he comes right over and puts his head in my lap and just looks at me.”

Not only does Lucca monitor his Eadus’s health, he keeps him company.

So when Lucca disappeared from home last week Eadus was beside himself.

“I was outside for about 6 to 8 hours walking all over the apartment complex and everything looking for him and I’d get up in the morning and look over to where he normally sleeps and he wasn’t there and I’d freak out,” he said.

Nearly 4 days after Lucca had gone missing Animal Control received a call about a dog wandering around Cote Lane. That dog was Lucca, and when they picked him up, they found he was injured badly with multiple gunshot wounds to the shoulder and head.

“I can’t imagine a person doing that. Why would you steal a dog and take him clear across town and shoot him?” said Eadus.

But Lucca survived, and has since been reunited with his owner. “Really emotional, I can’t believe he survived all that.”

In the coming weeks Lucca will be in and out of the Missoula Vet Clinic for checkups, but as for the medical bills, well they won’t be a problem as they’ve already been covered by the generosity of the community.

Eadus told MTN it blew his mind that so many people did that for Lucca. After a whirlwind of a week, Eadus says he’s just ready to get his pup back home. “Probably feed him and hug him and play with him for awhile and toss his ball around.”

If you have any leads on Lucca’s case you should contact Missoula County Animal Control.