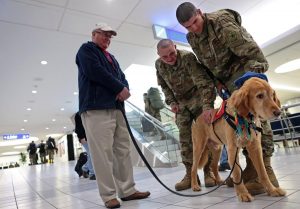 Missouri is a step closer to cracking down on phony service animals.

In one of their final acts before adjourning for the year, members of the Missouri House voted 137-6 to send Gov. Mike Parson a proposed law designed to curb the proliferation of fake emotional support animals.

The legislation was the culmination of eight years of work by Rep. Chrissy Sommer, a St. Charles Republican who cannot run again because of term limits.

“I am so happy and proud to eventually get this passed,” Sommer said.
The proposal follows efforts by airlines and communities to rein in the growing number of people traveling, shopping and dining in restaurants with a variety of animals.
Alaska Airlines, for instance, prohibits rodents, ferrets and snakes. Delta’s list includes birds, all amphibians and animals with tusks, horns or hoofs, such as goats.

Legitimate users of animal assistants say the rise in the number of fake support animals has made it harder for them to find acceptance for their trained companions in stores and other public places.

“There has been so much fraud when it comes to service dogs and ESA’s across the state and nation,” Sommer said.

The federal Americans With Disabilities Act requires restaurants and other businesses to allow service dogs and miniature horses — the only two animals recognized as service animals — in areas open to the public.

The legislation would add mental health to a list of reasons why people have a service dog, rather than limiting it to, for example, people with physical limitations.

The legislation notes that a psychological service dog would be trained for an owner who has a psychiatric disability, medical condition or developmental disability.

If signed into law, any person knowingly misrepresenting a dog as a service dog for the purposes of receiving accommodations under the ADA and the Fair Housing Act would be guilty of a misdemeanor.

Reports of individuals impersonating someone with a disability or misrepresenting an animal as a service animal would be handled by the Missouri Commission on Human Rights.

The state also would make placards available to businesses stating that service dogs are welcome and that misrepresenting a service dog is a violation of Missouri law.

The measure moved through the Senate in March on a 28-1 vote. If approved, it will go into effect on Aug. 28.