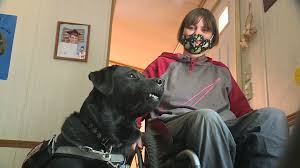 A Maine service dog is up for a prestigious national award for the work she has done with her owner.

Sherwood’s medical issues include mobility and heart issues, as well as emotional complications caused by years of domestic abuse.

Sherwood has taught Dolly to recognize them and help ease them.

“I don’t know what I would do without her. I mean, she’s been in the ambulance with me. She’s been to the hospital. She goes everywhere with me. She’s definitely alleviated a lot of my stress and keeps a good eye on me,” Sherwood said.

Because of her hard work, Dolly is a semifinalist for the Hallmark Channel’s Hero Dogs Award. Sherwood nominated Dolly in hopes of shining a light on the role service dogs play in people’s lives.

“I wanted the world to be able to know what she can do and what other service dogs can do,” Sherwood said.

While Dolly has mastered many skills, it is her companionship and the comfort she provides that Sherwood said is most meaningful.

“She allows me to trust people. With her by my side, I’m able to let people in a little bit more,” Sherwood said.