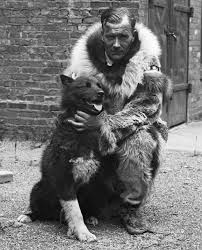 Today on National Dog Day, observed worldwide each Aug. 26, breeds, pure and mixed, and all that they do for us is being celebrated. National Dog Day honors family dogs and dogs that work selflessly to save lives, keep us safe and bring comfort. Some dogs put their lives on the line every day — for their police partners and blind companions, for the disabled, for our freedom and safety, and even the advancement of mankind.

In honor of the day, we are highlighting just a handful of the bravest and most loyal dogs in history, from Laika, the Russian pooch sent into space, to Sgt. Stubby, the most decorated war dog. These dogs and countless others around the world give new meaning to the phrase, “man’s best friend.”

Celebrated sled dog Balto helped successfully deliver life-saving medication to Nome, Alaska, in 1925, when a serious outbreak of diphtheria hit the city and medical officials needed antitoxins to prevent the upper respiratory tract infection from spreading. The nearest doses were in Anchorage and officials were forced to rely on dogsleds to deliver the antitoxins because the extreme cold made other modes of transport impossible. Balto was the lead dog for the final 53-mile leg of the total 674-mile trip that took seven days. By the time Balto and his team were on the road with their cargo, sled driver Gunnar Kaasen could barely see in front of him and was forced to rely on the dogs to reach Nome without his direction. Balto was celebrated as a hero upon their arrival in Nome and later with a media tour. A statue was dedicated to him in Central Park in New York City.

Serving with the 102nd Infantry, 26th (Yankee) Division, Sgt. Stubby was a pit bull mix who snuck his way onto the battlefields of World War I in France and became the unit’s mascot, serving in 17 battles. Shortly after arriving, Stubby’s unit was hit with a gas attack. After that, Stubby — with his keen ears and nose — would alert his unit incoming attacks to give the men time to put on gas masks. Stubby became an ideal search-and-rescue dog. He sniffed out a German spy and held him by the seat of his pants until American soldiers arrived. This earned him a promotion to sergeant, the only dog ever to receive such a promotion through combat.

After being found abandoned in the jungle of New Guinea, this 4-pound Yorkshire terrier lived large after being purchased by American soldier Bill Wynne of Ohio. Wynne trained Smoky and the tiny, 7-inch dog accompanied him for two years during World War II. While abroad, she entertained troops and earned honors for her bravery, saving Wynne’s life on at least one occasion by warning him of incoming fire on a transport ship. She is considered to be the first therapy dog, as her presence was a comfort to wounded soldiers and helped them heal. After the war, Smoky and Wynne went home to Cleveland, Ohio, and continued to entertain veterans and the public. She is memorialized with a statue in Lakewood, Ohio.

Rags, a mixed-breed terrier, fought alongside the U.S. 1st Infantry division in World War I. Pvt. James Donovan stumbled upon the dog while he was in Paris — initially using the dog as an excuse to avoid being arrested for being away without leave. He returned to duty, bringing along the dog as a division mascot. Rags soon became a carrier dog, delivering notes across dangerous fields to various posts. Rags and Donovan were sent back to the United States after they were both involved in a serious gas attack. Donovan died in the hospital, but Rags survived and became a celebrity around the country, eventually ascending to the rank of lieutenant colonel. He was buried with military honors in Silver Spring, Maryland.

Hachikō, an Akita Inu, is one of the most loyal dogs in history. Hachiko would meet his owner everyday at Shibuya Station in Tokyo as the owner returned from work. In 1925, when the owner died while at work and never returned home, Hachikō went to the train station day after day for years, even escaping from new owners to await the return of his deceased owner. A statue of Hachikō now stands at Shibuya Station, and the spot where he stood for many years is marked with a set of bronze paw prints.