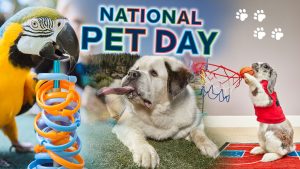 Many love their pets more than they love people – and we can’t blame them when they are as cute and cuddly as some of our record holders.

While every owner thinks their pet is amazing in their own way, there are some that are Officially Amazing because they hold Guinness World Records titles.

So in celebration of National Pet Day, check out some of the most talented furry friends we have in the record books. Bini is no ordinary bunny! The eight-year-old pet bounced his way into global success for his spectacular record-breaking ability to do the most basketball slam dunks in one minute by a rabbit. In a matter of sixty seconds, the Holland Lop rabbit can put a miniature basketball through a hoop seven times – an impressive total for such a tiny animal. Owner Shai Asor affectionately jokes that Bini developed an interest in basketball thanks to him. He says that basketball is Bini’s favorite activity, and that he even practices his dunks every night before going to bed. On the days he’s not trying to become the next basketball legend, Bini wakes up very early and runs around the house, before eating some fresh greens for breakfast. Bini is a well-rounded rabbit, and enjoys the arts as much as sports. He is capable of styling hair and painting, by holding a paint brush in his mouth.

Those who know Nala might recognize her from her brilliant blue eyes and characteristic faces. After all, she is in the Guinness World Records 2020 book for having the most followers on Instagram for a cat. But while Nala boasts 4,323,973 followers on the platform (and counting), she wasn’t always insta-famous. Like many animals across the United States, her story began in a pet shelter in California, where her owner Pookie adopted her back in 2011. Pookie began Nala’s renowned account to share with friends and family, but she never dreamed it would get the amount of attention that it does today. After nurturing her original followers, interacting with fans, and developing Nala’s persona on her profile – it is now one of the most thriving pet accounts in the social media world and has led Nala to have opportunities such as having her own pet food line and writing a book.

Loving words from Nala’s owners: “It wasn’t until she was adopted and cared for, that she became the lovable cat she is today. Even though I never really intended to adopt a kitten that day, when I saw her, I just knew it was meant to be.” Abbie Girl is a kelpie who holds the record for the longest wave surfed by a dog (open water) after surfing a 107.2-m-long (351-ft 8-in) wave at Ocean Beach in San Diego, California, USA, on 18 October 2011. Kelpies are an Australian dog breed. They herd sheep, occasionally jumping on the backs of stubborn individuals to steer them while balancing on top – exactly the same balancing skills needed for surfing! Abbie Girl’s owner Michael adopted her as a shy rescue dog five years ago. To build her confidence, he would take her to a beach used by other dog owners. She would follow him into the water and enjoy jumping on his surf board. One day he allowed her to float with the wave and she didn’t fall off. Since then, she’s always loved to surf. Nowadays Abbie will attend local dog surfing competitions and spends most days in the water! When it comes to tongues, Mochi “Mo” Rickert, a female St Bernard from South Dakota, USA, has the competition licked. Officially measured by a vet at 18.58 cm (7.3 in) – the equivalent of two-and-a-half Jenga blocks in a row – Mochi’s was verified for having the longest tongue on a dog (current) in 2016. Mochi’s owners got their extraordinary, peanut-butter-loving pooch from Big Dogs Huge Paws rescue home when she was two years old. They never expected for their pet to have a Guinness World Records title! Obstacles Mochi faces as a result of her long tongue include breathing challenges, extra slobber when she’s nervous, dirt, dust and leaves sticking to her tongue and needing help when picking things up off the floor. However, that doesn’t stop her from doing some of her favorite things like posing for photos and snacking on sweet potatoes!