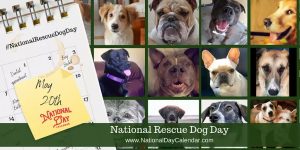 On May 20th, National Rescue Dog Day recognizes all the benefits of allowing a four-legged canine to adopt you into their immeasurably lovable life.

According to the ASPCA, approximately 3.3 million dogs enter shelters every year. When these abandoned and abused animals find their way to a shelter, each one needs a forever home and their potential is limitless. They’re rescue dogs.

Rescue dogs provide a variety of therapeutic benefits. Children, teens, and adults with autism may benefit from services provided by trained rescue dogs.

As emotional support companions, rescue dogs help to relieve anxiety, depression, and PTSD among the military or those who suffer from mental illness.

They make excellent teachers, too. Rescue dogs show children about caring and kindness.

Rescue dogs can even be trained to rescue us from dangerous situations or help to investigate the cause of a fire.

Most dogs entering shelters are still young. Research published in the Macedonian Veterinary Review found that, in 2013, the average age of a shelter dog was under two years old, proving that there are dogs of all ages available for adoption.

Of the 6.5 million animals that enter animal shelters nationwide every year, 3.3 million of those are dogs.

one study conducted by researchers at the University of Florida found that having a pet dog around allows children better cope with stress, setting them up for success in the future.

According to the pet adoption website PetFinder, approximately 60 percent of shelter dogs nationwide are put to sleep every year because they can’t find a home.

Because so many dogs are brought to the shelter having already lived in a home environment, it’s more than likely that you’ll find that your new pet already knows some of the basic commands.

According to one study of 3.4 million individuals published in Scientific Reports, single dog owners were 33 percent less likely to die compared to their pet-free pals.

It costs taxpayers roughly 2 BILLION bones a year to round up, shelter and euthanize homeless animals.

Did you know adopting a pup can help you lose weight? Dog owners are more active than their pet-less counterparts. (Sneaking in exercise through walks and fetch doesn’t hurt, either!)

1 out of every 10 dogs born will find a permanent home.

According to Slate, one survey found that “82 percent of people [felt] more confident approaching an attractive person if they had their dog with them.”

Another study cited by Slate found that in the modern world of dating apps, people with dogs look more approachable and happy than those who are dogless.

There have been several studies on the best ways to calm dogs in kennels. Classical music seems to work well, but a 2016 study found that compared to other “auditory conditions,” kenneled dogs were more relaxed while audiobooks were playing. Cesar Milan then did his own tests and found that 76 percentof his volunteer dogs were more relaxed at home while listening to audiobooks—and teamed up with Audible to create a specialized audiobook service.

I’s not just adults who experience health benefits from having a dog; another study found that child dog walkers played outside more and were more likely to walk in the neighborhood.

The Newfoundland breed has a water resistant coat and webbed feet. This dog was originally bred to help haul nets for fishermen and rescuing people at risk of drowning.

It’s rumored that, at the end of the Beatles song, “A Day in the Life,” Paul McCartney recorded an ultrasonic whistle, audible only to dogs, just for his Shetland sheepdog.

Dogs chase their tails for a variety of reasons: curiosity, exercise, anxiety, predatory instinct or, they might have fleas! If your dog is chasing his tail excessively, talk with your vet.

Dalmatian puppiesppies are pure white when they are born and develop their spots as they grow older.

Dogs’ eyes contain a special membrane, called the tapetum lucidum, which allows them to see in the dark.