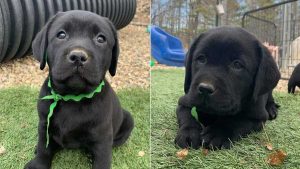 Officials with the Williston Police Department announced the addition of a new comfort K-9 this week — Duke.

After joining the department on May 3, he will be its only service dog and will be overseen by an officer. Duke was donated from Boonefield Labradors in New Hampshire.

The puppy will have to undergo a series of training exercises before he will become officially certified, however the department said it will provide updates of his progress along the way.

K9 Duke was very generously donated to our department by Boonefield Labradors to work as a Comfort Dog, and after he’s gone through his training will be a certified therapy dog. He’s got a lot of training ahead of him, but we’re super excited to share his journey with you. He has his own page K9 Duke VT where can you follow him, but he will also be featured on our page from time to time.