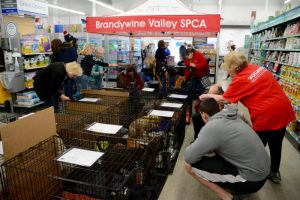 Sussex County has been out of the dog-control business for nearly five years, but county officials will still pay $768,000 a year to the state to provide services.

At its June 2 teleconference meeting, Sussex County Council approved a new memorandum of understanding with the state Office of Animal Welfare for animal, dangerous dog and rabies control, and animal cruelty investigations.

The original memorandum was signed in 2015 when animal control, which had been a county function, was taken over by the state. The county pays the state $64,030.36 at the start of each month. Since the state took over animal control, service calls have increased 26 percent.

Delaware Animal Services is the enforcement unit of the Office of Animal Welfare, with certified animal welfare officers on duty weekdays and weekends and on call 24 hours a day, seven days a week. Officers respond to calls regarding stray or aggressive dogs, dogs at large, and dog housing and welfare concerns.

The primary role of the officers is dog control. However, they also respond to calls for severely injured or endangered stray cats and investigate reports of animal cruelty.

Brandywine Valley SPCA is under contract with the state to provide the services outlined in the contract as the designated shelter provider for Sussex County. The SPCA operates out of two locations in Sussex. It took over the former Georgetown SPCA building on Route 113, and renovated and modernized the facility. Brandywine also purchased the former Safe Haven shelter on Shingle Point Road near Georgetown.

Brandywine receives all strays, dangerous, injured, abused and quarantined animals that are picked up by state officers. Brandywine is charged with providing housing, care and medical attention, as well as pet-owner reunification and adoption programs. Brandywine was the first no-kill shelter in the nation.

But as Brandywine’s Director of Administration Walter Fenstermacher explained, the SPCA goes beyond its contract to provide other programs including veterinarian services, spay-neuter clinics, pet food distributions and a trap-neuter-vaccinate-return program for feral cats. He said in 2019, throughout the state, 2,600 feral cats were treated and released.

He said a private fund has been established to assist pet owners with veterinarian care.

Fenstermacher said SPCA staff works with pet owners who are struggling financially who can’t afford food or medical service. “Our goal is keeping pets in their homes outside of the shelter,” he said.

The former Safe Haven shelter has become a national facility to accept pets that are victims of natural disasters, he said, with more than 2,000 pets rescued so far.