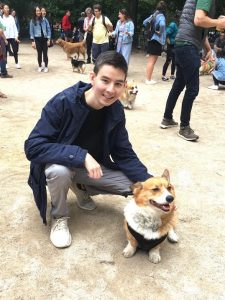 Expect more bark at Bayonet Farm, as in ‘dog bark’! A new dog park was approved by the Township Committee on Tuesday of this week. The inspiration behind the project is Holmdel’s beloved Alex Ching, a highly respected young man, who bravely battled pediatric cancer from the age of 7. Ching sadly succumbed to the illness at age 24. This month is pediatric cancer awareness month, making the approval of the memorial timely. According to Ching’s family he found great joy in visiting dog parks. Alex Ching’s joy for life will continue to be shared, as countless happy memories will be made in a park he inspired.

The fenced dog park is set to be built on the farm formerly owned by Laura Harding. Harding was a gracious donor of property to Holmdel years ago. It will be called ‘Alex’s Paw Park’ and was inspired by the family of the late Alexander Ching.

The project is said to be fully funded through private donations, fundraisers and volunteers.

According to the Township Administrator Cherron Roundtree. “The location is near the existing gravel parking area in front of the two barns closer to the road side. The family that has proposed the park has raised a significant amount of money. Believe it or not things as simple as double fencing get into the tens of thousands of dollars – they are also seeking some physical donations.” said Roundtree. “Even the fill (dirt) on the ground cost significant money so all the amenities are not outlined but it will start with the basics such as providing water, having the fenced in areas, getting the dog bags to clean up after your dog and as they raise additional funds there will be additional amenities that fit within the nature of the park. They looked at big tree trunks that the dogs can jump on.” said Roundtree.

According to the resolution, in November 2019, the family of the late Alexander Ching (see more info below about Alex) approached the Township with the request to pay tribute to Alex’s memory by constructing a dog park in Holmdel Township. The Township gave preliminary approval to have the dog park built at Bayonet Farms located at 41 Middletown Road, and the Ching family has provided the Township with conceptual plans. The Township Administrator and Township Director of Infrastructure were directed to plan the park accordingly and the Township Committee ‘extended their condolences to the Ching family for their loss and gratitude for their generous and thoughtful donation.’Alex pictured below loved dogs. As a child fighting cancer he found joy in the therapy dogs, and he had a family dog growing up. When he was living and working in NYC, he was often too sick to take on the responsibility of having his own dog, but he loved to visit the dog parks in NYC. The picture below is of Alex visiting the dog park in NYC to enjoy watching the dogs who visited.