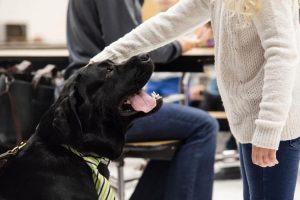 The Massena Central School District’s Board of Education has adopted a new policy regarding the use of a therapy dog at the high school.

The lone “no” vote came from board member Kevin Perretta, who had several questions regarding the policy during the board’s April meeting.

The policy, which was scheduled to be adopted last month, notes that a written application must be submitted to the superintendent (Patrick Brady) and will be reviewed by “a committee established by the superintendent for that purpose. The committee will include one or more canine experts.”

Among the questions Mr. Perretta had last month was, “What is the definition of a canine expert?”

He also wondered, among other questions, if the custodial staff would be responsible for cleaning up therapy dog accidents indoors and outdoors, and he requested a definition of how students and adults opposed to the dog would be handled.

“We revisited the proposed therapy dog policy. Mr. Perretta sent Mr. Brady a series of questions that Mr. Brady answered and emailed to us. Pat shared with us at the committee meeting that he’s contacted the St. Lawrence Valley Dog Club about providing a trainer to serve on the superintendent committee for the therapy dog as directed in the policy,” Policy Committee Chairman Paul Haggett said during Thursday’s meeting.

He said Mr. Brady also had a list of protocols dealing with dog allergies and dog aversions by students and staff.

The policy was drafted after high school guidance counselor Nicole LaPage requested that the board consider allowing her to use therapy dogs to reduce anxiety among some students. She said she would like to pilot the program during the 2020-21 school year.

According to the policy, “This pilot-program will begin with the 2020-21 school year, be reviewed throughout the year, and a determination will be made to continue or discontinue the program by July 1, 2021.

During the pilot-program a therapy dog will be allowed at Massena High School under the supervision of its handler in the school counselors’ office.”

The policy notes that district officials support the implementation of the program “for the social and emotional benefit of its students.”

The therapy dog must be under the handler’s control at all times.

The handler will be solely responsible for supervision and care of the therapy dog, including any feeding, exercising and cleanup while the animal is in a school building or on school property.

The district is not responsible for providing any care, supervision or assistance for a therapy dog.

Speaking at Thursday’s meeting, Ms. LaPage said she felt having a therapy dog had become more important after what students and staff had encountered with the closing of schools.

“I think it has become infinitely more important than ever before. We have no idea what our students have gone through in this time of school closure,” she said, noting it had also been difficult on staff members.

“One of the things I worry about for everyone is that, A, we don’t know when we’ll return to school and, B, when we do, what don’t know what it looks like,” she said.

Mr. Perretta said he appreciated the work Ms. LaPage had done in answering his questions.

“I’ve been the one that’s been the most outspoken about this. I’d like to thank Nicole for the work that you’ve done because, although I vehemently disagree with it, I respect the work that you’ve done and the passion for what you’re going to do,” he said. “I do love dogs. I have a dog. But my stance on whether they belong in school is what it is.”