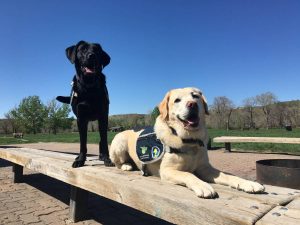 Anyone who has been a victim of a crime can attest to how emotional the process following the incident can be. That’s where Madison and Marlee come in.

The pair are both victim advocates with Victim Services Lethbridge Corridor.

Marlee and Madison might have the same job, but their handler Adonus Arlett said their personalities couldn’t be more different.

“Madison doesn’t like to carry a stick, Marlee will carry three or four sticks in her mouth at once and a teddy bear.”

Marlee is the newest member of the team. At just two-years-old, her personality is perfect for the heavy caseload the dogs face.

“With Marlee, things just roll off her back, she doesn’t take things to heart, she’s pretty chill that way,” Arlett said. Eight-year-old Madison is retiring a little early. She is a highly trained to support in emotional and stressful situations like filing police reports or testifying in court.

“No matter what we did to debrief her, she was finding it harder and harder to let go of her days and it started to wear on her just like anybody else who isn’t able to let go of their jobs. You see depression and post-traumatic stress,” Arlett said.

It takes a special kind of animal to offer the quiet, obedient support a young victim may need.

“They get to be the silent advocates where I can’t go. The dogs will hold onto someone’s hand, they’ll kiss them, they’ll let them know that it’s OK, they are not alone, someone’s there with them,” said Arlett.

Madison and Marlee are from an accredited service organization called Dogs with Wings, and go through a rigorous two-year training program.

“If we are going to have these dogs work with vulnerable populations, if we are going into professional buildings like the courthouse or the Crown’s office or police agencies, they have to know their job and we need to trust and understand in their training that they are bombproof, really,” Arlett said.

The dog program is done on a volunteer basis and relies on community support and donations.