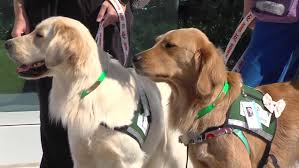 Baskin and Agnes, a golden retriever and goldendoodle, are therapy dogs for the MUSC Shawn Jenkins Children’s Hospital.

The two therapy dogs will spread joy and comfort to young patients.

“To help every day in the life of a child in the hospital, have a little more normalcy, a little more urge to get out of bed and go for a walk, a little less afraid to get chemotherapy,” said George Ross, CEO of Coastal Franchising.

MUSC received the two dogs from a $150,000 grant handed from the Dunkin’ Joy in Childhood Foundation.

Now, both dogs are officially a part of MUSC’s staff, even with a badge to prove it.