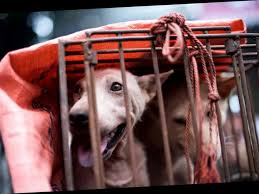 An updated version of China’s Directory of Genetic Resources of Livestock and Poultry was released Friday, and it notably does not include dogs on the list of animals that are allowed to be bred, raised, traded and transported for commercial purposes.

“With the progress of the times, people’s civilization ideas and eating habits are constantly changing, and some traditional customs about dogs will also change,” a spokesperson for the Ministry of Agricultural and Rural Affairs told reporters, according to a translated transcript posted to the ministry website.

The change is in line with the recent announcement from the Ministry of Agricultural and Rural Affairs that China would no longer classify dogs as livestock.

“As far as dogs are concerned, along with the progress of human civilization and the public concern and love for animal protection, dogs have been ‘specialized’ to become companion animals, and internationally are not considered to be livestock, and they will not be regulated as livestock in China,” an April notice from the ministry read, per Reuters.
Humane Society International estimates that some 10 million dogs and 4 million cats are killed in C hina every year for meat. HSI spokesperson Wendy Higgins told The Guardian last month that the new policy is a potential “game-changer moment for animal welfare in China.”

The update to the Directory of Genetic Resources of Livestock and Poultry comes less than a month before China’s Yulin Dog Meat Festival is set to take place.

The festival, created in 2010 in an effort to boost flagging dog meat sales, according to HSI, has long been controversial both in and outside of China. This year, it is planned for June 21 through June 30.

“In just a few weeks, the dog slaughterhouses of the city of Yulin will be full with terrified dogs awaiting bludgeoning and butchery for its infamous dog meat festival,” Higgins told The Daily Mail. “Experience tells us that many of those dogs will be precisely the beloved companions and helpers and service dogs the national government talked about in its statement as being not for food.”