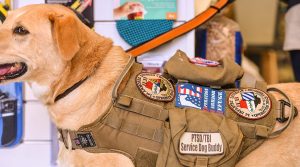 A measure that would prohibit a landlord from denying housing to a person with a disability because of their support animal arrived on Gov. Ron DeSantis‘s desk Monday evening.

The bill, SB 1084, impacts Florida’s Fair Housing Housing Act with several amendments including a prohibition of additional fees for those assisted by an emotional support animal.

SB 1084 clarifies that an animal is not required to be trained to assist a person. However, the animal must be able to alleviate a person of identified symptoms because of its presence.

Current law requires a “service animal,” such as a dog or miniature horse, to be trained to aid an individual with a disability to qualify.

Under the bill, landlords will retain the right to prohibit the animal if it poses a “direct threat” to the safety and health of others and the property under the bill. Landlords are also permitted to request written documentation from a health care practitioner from prospective tenants.

DeSantis has until June 30 to act on the measure.