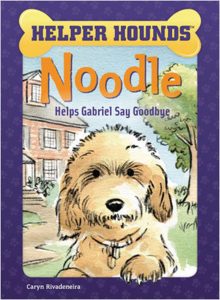 What follows is my own guilt-ridden disclosure. I’ve never been much of a Mr. Rogers fan. I favored Big Bird and Cookie Monster over Mr. McFeely and Officer Clemmons. My kids, who are now parents themselves, consumed hours of “Sesame Street,” which I encouraged, hoping they were learning important early academic skills. I just didn’t “get” the whole Mr. Rogers thing. Maybe it was his over the top kindness that didn’t seem realistic to me. Or perhaps it was the long pause that always accompanied his deeply penetrating looks. This past weekend I had a change of heart after watching the 2019 film “A Beautiful Day in the Neighborhood” starring Tom Hanks. As I began to fully understand the empathy that Fred Rogers had for others, I couldn’t help but see parallels between the film and Caryn Rivadeneira’s recently published children’s book, “Noodle Helps Gabriel Say Goodbye” (Red Chair Press). What I comprehend now, but didn’t before, is that Mr. Rogers possessed what we currently refer to as “emotional intelligence,” something sorely overlooked for years in classrooms and yes, even in many homes. Noodle, the main canine character in the book, is trained to be a “world-famous Helper Hound” and like Fred Rogers, provides comfort and calm for others who are emotionally fragile.

A GOLDENDOODLE BORN TO HELP OTHERS

Curly Noodle, better known as just Noodle to her friends, is a goldendoodle. She narrates her own story, telling readers that, “helping people is what I was born to do.” The story begins in the present-day where readers meet Andrea, Noodle’s current owner. Andrea, Noodle and Andrea’s partner live in a home that is on the North Branch University campus. Noodle is the proverbial “big girl on campus.” The university is a place she loves, “Where everybody knows your name … and they’re always glad you came.” Students stop to cuddle her and burrow their faces in her hair. They find Noodle a gentle listener, often talking to her about their worries or bouts of homesickness.

Readers soon learn that Noodle is not only trained as a therapy dog, but she has experienced loss firsthand when she was forced to leave her two previous forever homes. A few early chapters present flashbacks of Noodle’s life before Helper Hounds, but quickly lead up to her current case involving Gabriel. Gabriel is a young boy who cannot cry following his grandfather’s death. Gabriel’s family offers him support and religious solace, but they don’t know how to draw out his bottled-up emotions. Noodle’s soothing presence helps Gabriel deal with his grief.

FACING LOVE THAT LINGERS AFTER LOSS

Gabriel’s story is central to the book’s theme: Love for those we have lost can continue to linger as we move on in life. As noodle puts it, “Somehow there are always more people to love.” Who doesn’t need that message today? Our kids face enormous stressors — bullying, divorce, poverty and, let’s not forget, a pandemic. My own grandson struggles at times coming to terms with his emotions. While Fred Rogers is no longer around to quiet him, I would venture to say that a Noodle proxy might be just what the doctor ordered.

“Noodle Helps Gabriel Say Goodbye” is a sensitive book and part of the Helper Hound Series by Caryn Rivadeneira. This appealing series focusing on therapy dogs for early readers would be a great addition to home and school libraries.