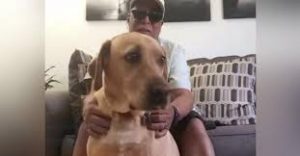 In mid-March, Joe Tasby, who is blind, walked into the emergency room of Southern Hills Hospital in Las Vegas with his guide dog Cupid. He thought he had torn a shoulder tendon lifting weights. “I thought I’d be able to just walk out in three days, but it ended up being 20,” the Vietnam veteran told CNN.

But when doctors examined the 70-year-old, they discovered lung disease and heart arrhythmia. He was admitted immediately with Cupid by his side.

Tasby began losing his vision five years ago, the result of glaucoma and diabetes. Guide Dogs For the Blind set him up with Cupid last year.

During the first few days in the hospital, Tasby’s daughter Tiffini came to feed and walk Cupid. But while he was there, the coronavirus pandemic hit. Southern Hills Hospital locked down, banned visitors and Tasby’s first worry was how to care for his yellow Labrador retriever.

That’s when Barbara Borbeck, a nurse at the hospital, came into the picture. “Barbara stepped up and said, ‘You don’t worry about that. I will take care of that for you,’” Tasby recalled.

For nearly three weeks, Borbeck walked, fed and cared for Cupid. She even enlisted other hospital staff to help out on her days off. “With the kind of work Cupid does, it’s important that he’s not getting ill and that we maintain his normality,” said Borbeck.

When the yellow Lab ran out of his specialized dog food, the animal lover went on a mission to find it. Not an easy task due to barren shelves from panic buying. The nurse took a 40-minute drive to a specialty store to find the right stuff.

That certainly was good news for Cupid, because he was on double-duty. With the hospital on lockdown, therapy dogs had not been allowed to make their rounds. On some of her daily walks, Borbeck visited other hospital departments with Cupid, which she says brought lots of smiles during the pandemic.

Tasby and his Lab finally headed home April 1. “It was emotional,” said Borbeck. “Joe is such an amazing man and Cupid — he’s my buddy. We are happy they are going home, but I’m so looking forward to visiting Joe and Cupid again when things open back up.”

Tasby says it isn’t just the physical healing he is grateful for — it’s the compassion of the heroes among us. “If you find somebody at the right time doing the right thing, that’s Barbara,” Tasby made clear.

“I spent a lot of time volunteering and helping veterans, and when I see something like this turn back towards me, it leaves me speechless.”