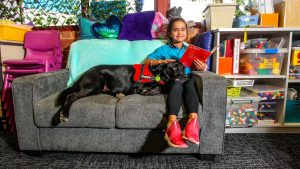 During an anxious time when everyone is experiencing the unknown, one workplace has found the perfect solution to calm nerves and reduce stress.

O’Connor Primary School welcomed its first therapy dogs at the start of Term 1, and teacher Jo Talbot said they had been a godsend for staff and students in the past few weeks.

“Poppy is now a certified therapy dog — she can be used in schools, nursing homes, in hospitals and things like that to help with anxiety and other things for kids and people,” Ms Talbot said.

“I brought (her) in a couple of times last year because I had a couple of kids with autism, and just her reaction with the kids was just amazing so I thought I’d just do a bit more research into this and go a little bit further,” Ms Talbot said.

“So I approached my boss and he helped fund the training for it and now our school has an official therapy dog.”

“It was interesting what kids the dogs chose to go and sit next to, because in the classroom they are not on their lead so they can wander,” she said.

“The kids just pat them and they get on with their work and the dogs go on to someone else that is off-task. It’s beautiful to watch actually.”

While Jesse is just a puppy and still undergoing training, Poppy underwent some intense training with Ms Talbot.

“I thought I was becoming a vet at one stage — there is so much theory and things like that about the dogs, the breeds, diseases, looking after them, grooming, stuff like that, so it was very in depth,” Ms Talbot said.

“Then I had to do a series of videos to show how the dog reacted with people, other dogs and the children.

“It’s been a very interesting course to do.

“Jesse only comes in once a week, she’s only a puppy, so I’m making sure when she comes in we don’t stress her out too much as she is only young.”