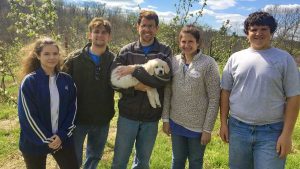 It was just a chance meeting, but one that all involved believe could have a huge impact on the lives of some of our returning veterans.

Lonny Smith, Business Development Manager of AgroLiquid, was at the company headquarters in St. Johns, MI, one day last fall when he learned Michael O’Gorman, Executive Director of the Farmer Veteran Coalition, was visiting. O’Gorman is a longtime West Coast vegetable grower who founded the coalition a little over a decade ago to help returning vets find agricultural employment. He was there with the program’s state coordinator, Nick Babcock of Michigan State University, to meet with company officials about supporting the coalition. Smith had heard of O’Gorman’s work, and he had an idea. Smith and his wife Kim own Red Hive Golden Retrievers — the name borrowed from their own Red Hive Farm, a small apple orchard — near Bellefontaine, OH. Kim heads the business, which raises European-style English Cream golden retrievers, and they thought their pups would make great farm dogs for veterans.

So Operation Farm Dog was launched. The Smiths now donate one puppy from each litter to a veteran who is going to be working in agriculture. It is not a large operation, but they hope other breeders from across the country will join and donate.

Veterans submit an application, and then Smith interviews them on their plans in agriculture, and Babcock, a veteran himself, from the military perspective.

The most recent recipient is Jimmy Martin, an Air Force veteran from Carlisle, KY. Upon returning in 2012 — though he serves in the Air Force Reserve and works full-time as a Quality Assurance Specialist for Department of Defense — Martin founded Bluegrass Belties Farm & Orchard.

“I have a small orchard, and here Jimmy had one that he was using to educate other vets coming out of the military who want to get involved in horticulture,” Smith says. “I was impressed — an apple orchard is a lot of work, and he started it from scratch. That’s tough enough as it is, but to educate other vets? Awesome.”

Martin says he grew up on a farm, so he had a feeling that it would be a good experience for other vets, who generally like working outside with their hands.

“I believe the orchard is very therapeutic, especially for veterans who may have the same types of anxieties or need that outlet for stress relief,” he says. “So, I would like to be able to have small classes or whatever it takes to help them with a trade that may help them with their lives.”

“I like the old heirlooms better, really, but I wanted to offer a mix of fresh-eating and baking apples,” he says. In addition to apples, they also grow smaller amounts of pears and peaches. A portion of each harvest will be donated to the Lexington Veterans Home.

The Smiths recently visited Martin and his family to present them with their new puppy, Lady Liberty Rose. Martin says he fell in love instantly but quickly adds this is not about him.

“We want her to be therapeutic, but she’s not just there for us,” he says. “When we have visitors, she’s there to lean on. She’s there for the people. That’s her purpose here.”

Smith says Red Hive Golden Retrievers is just a small operation, and their goal is to grow Operation Farm Dog nationally, eventually placing 100 puppies with 100 veteran farmer families each year. They will be calling on American Kennel Club-registered sporting and working-class dog breeders around the country to help by donating as many exceptional puppies as they can.