Owner is ‘winding down’ business, Dogs were not abandoned 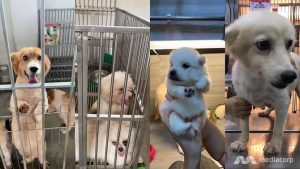 SINGAPORE: The dogs at breeding facility The Animal Lodge have not been abandoned, said the Animal and Veterinary Service (AVS) on Thursday (Apr 2), after messages circulating on WhatsApp claimed that 120 dogs were found at an abandoned dog farm.

“We received feedback that dogs in a dog breeding facility were allegedly abandoned and commenced investigations immediately,” said group director of AVS Jessica Kwok in response to CNA’s queries.

The dogs and the facility in question have not been abandoned, she added.

“The owner is in the process of winding down the business and has been working with a veterinary clinic to care for and rehome the dogs,” said Ms Kwok.

“AVS will continue to work with the owner to ensure that the welfare of the dogs is taken care of.”

According to a message circulating on WhatsApp on Wednesday and Thursday, a vet had found an abandoned dog farm in Yio Chu Kang with 120 puppies and adult dogs.

“The 120 dogs are going to the vet friend now first but he can’t house them all,” the message read. It also called for people to adopt or foster the dogs.

Those who reached out to the person who was listed as a point of contact in the circulated message later received an update to thank them for the response, inviting them to follow Stars Veterinary Clinic’s official Facebook page for more information on the dogs.

When CNA visited the clinic on Thursday afternoon, staff declined to comment on the matter and directed queries to the clinic’s management.

In a Facebook post on Wednesday evening, Stars Veterinary Clinic said it would be posting pictures of the dogs that are up for fostering and adoption on its page.

“However the fostering/adoption process will only be applicable when the dogs are ready. Also, replies will not be immediate so please be patient,” the post read, adding that phone calls, messages or drop in visits at the clinic will not be entertained.

In her statement, AVS’ Ms Kwok urged the public to refrain from speculation while investigations are ongoing. She said members of the public who have information on the case can alert AVS.

“As with all investigations, all forms of evidence are critical to the process and photographic and/or video-graphic evidence provided by the public will help,” she added.