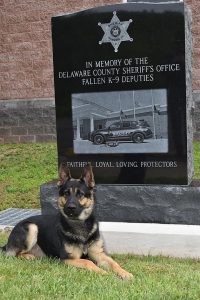 The Delaware County Sheriff’s Office paid tribute to their late K-9 Osman Steele (“Ozzie”) with a ceremony Monday at the headquarters in Delhi, NY. A plaque was unveiled to remember K-9 Ozzie and all fallen K-9 officers. Ozzie died in April due to a number of health issues. Sheriff Craig DuMond says “the bond between a K9 and their handler is eternal and a trust between them in a nameless language”.

Ozzie’s handler was Major John Demeo, who described his relationship and partnership with Ozzie as “an inspiration to me as well as many others in Delaware County”.

All K9s are highly trained special dogs who are required to not only track down suspects but to regularly visit with children in schools and must stay calm while kids pet them and possibly pull on their ears, much like a therapy dog. Switching back and forth between those two “modes” of behavior is difficult and makes a K9 special. K9 Eli (pictured below) is currently in training with Deputy Karcher.