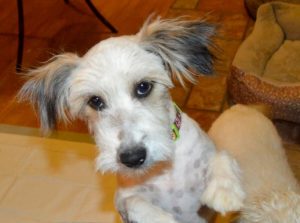 When Tyler Warrick came home from serving in the Iraq war, he suffered from Post Traumatic Stress Syndrome.

“My little dog, Moose, gave me a purpose to get up every day and deal with life,” he says.

That was the genesis of Painted Paws for Veterans, a nonprofit operating in Peyton that rescues dogs from across the United States, as well as locally, and helps train them to serve as companions to war veterans.

In October, the compound sheltered 74 dogs and a few cats as well. “We’re a big, big sanctuary,” says Warrick, who runs the nonprofit with his wife, Sara.

The name, Painted Paws, comes from the fact that canines are born one color and don’t show their spots, in the case of a Dalmatian, or other markings until they are 6 to 8 weeks old, Warrick says.

Both he and his wife are certified trainers who prep dogs to be service dogs. “We actually pick out the ones in the litters that have the right personalities for service work,” he says. But some dogs are adopted just as companions.

As the website explains, “We love our pregnant moms. We bring them to the Ranch and provide them with the medical care they so badly need during those critical weeks. We help them bring their babies into life and give them a safe place to grow. Once the puppies are old enough, we offer them to the general public for adoption. Our moms are often available for adoption as well, but they also have a lifetime home with us if necessary.”

Dogs come to the compound from kill shelters, and not all are immediately ready for adoption. Painted Paws is willing to take on dogs in need of rehab and give them a chance at a forever family, but they don’t accept dogs from people surrendering them for any reason.

“It is so critical for puppies to receive the proper socialization and obedience after they become part of a family,” the website says. “After they come to the Ranch, we provide them with the love, attention and structure they so desperately need. Many of these dogs go on to become our most successful adoptions.”

Warrick estimates that Painted Paws has paired dogs with up to 3,000 vets since it began in 2013. But that’s not its only mission.

The dogs are available for visits with vets, who want to interact with the dogs but not take them home. They also visit nursing facilities and Veterans Administration hospitals.

The nonprofit is run by a four-member board and relies on 25 volunteers. Warrick and his wife are the only full-time paid employees.

“We actually have a veteran who’s been volunteering for years,” he says. “In the last six months, he was so happy to get a dog. It not only helps him deal with the effects from Iraq, but he has that buddy all the time who lets him be involved with life and gives him a better purpose.”

Warrick’s personal companion, a Westie/Wheaten terrier mix named Ollie (Moose died some years back), is like a full-time medic. “He helps me with my seizures,” he says. “If I hit the ground, he will run to my aid, lay over my arms so I don’t hurt myself.

“If he feels me getting stressed, he’ll put his paws on me to try to calm that trigger moment.”

Sara says Painted Paws’ annual budget is $120,000, which covers salaries and goes to house, feed and train the dogs in two large rehab kennels and 14 senior and disabled cottages, and provide veterinary care and nutrition.

“Every publicly donated dollar goes straight to the care of the dogs and program expenses,” she says via email.

Adoption visits are by appointment only. There is no charge to veterans to adopt a dog from Painted Paws.