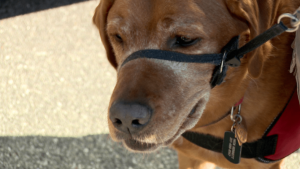 Lawmakers are pushing to pair service dogs with veterans suffering from PTSD. Currently, the Department of Veterans Affairs does not provide service dogs for mental health conditions.

“Three years ago, the VA began its study into the effectiveness of service dogs to treat PTSD. Since then, nearly 22,000 veterans and service members have taken their own lives,” said Rutherford. “We cannot afford to wait any longer. Anyone who has ever owned a dog can speak to their emotional support and therapeutic benefits. In fact, I often hear veterans who use a service dog tell me: ‘But for that dog I would be dead today.’ That’s why we need this legislation to move forward.”

If it passes, the PAWS Act of 2019 says the Secretary of Veterans Affairs would distribute grants, not to exceed $25,000, to eligible organizations. The program is currently capped at $10 million from Fiscal Year 2019 through Fiscal Year 2022.

As part of a pilot project, the VA is providing service dog benefits for veterans with PTSD who have a mobility disorder, consistent with current VA policy. A spokesperson said the results of the study will inform future decisions whether mental health diagnoses will also be directly covered. The results are expected to be released publicly in 2020.

“The VA is based on evidence based medicine. We want people to use therapy that has proven value,” said Dr. Michael Fallon, the V.A.’s chief veterinary medical officer;

Nick Bennett is a retired staff sergeant of the U.S. Marine Corps who now lives in Franklin. Bennett said he served for 11 years after he was medically discharged in 2007.

While serving in Iraq, he said a 107 mm Chinese rocket hit his unit. Several members of his team died. He survived but the warhead took off the back part of his right leg. It took him more than a month to get out of bed and walk. He’s had nearly 30 surgeries.

“In addition to all of the physical wounds, I was hit with anxiety,” said Bennett.

It’s hard for Bennett to talk about how far he has come since his time in Iraq. He said his marriage of 16 years disintegrated.

“I got divorced and walked away from my 3 kids because how can I be a dad when thunderstorms hit and I just want to crawl underneath the table,” he said.

Afterward, he worked to get a service dog to help treat his PTSD. Festus ended up costing him more than $1,000 because he said the VA could not help.

“They said you do not have any mobility issues, you do not need a dog,” Bennett said.

“They have a lot less flashbacks, night terrors and things like that,” said Sean Diamond, Director of Training for ICAN.

“We want to be a part of that. They have served our country. We should be there for them,” he said.

Bennett said the Marine Foundation of Indiana gave him money to pay for Festus. The group is made up of men in the unit he fought with overseas.

Research led by the Purdue College of Veterinary Medicine said service dogs might be able to offer both behavioral and physiological benefits to help counter some of those symptoms for veterans struggling with post-traumatic stress disorder. The findings published in 2018 said veterans may benefit physiologically from having a service dog.