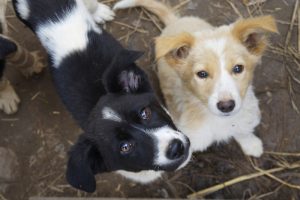 What’s the ultimate cure for this recent heaviness? Puppies, of course.

In the past few weeks, families have been using the forced time at home to finally say yes to the question they’ve been asked for months/years: “Can we get a puppy . . . Pleeeaaassseeee???”

“For years, my kids have asked—daily—for a dog,” says Jessica Klaitman. Slowly, she and her husband’s firm “no” had started to soften. “Not that we ever told the kids that,” jokes Klaitman, who lives in Towson. Then quarantine hit.

As she walked her kids home from school on March 13th, the last day that schools were open, a dog was the last thing on her mind.

“A week later though, as the reality of our collective situation started to sink in, and the tears and frustration started showing,” Klaitman says, “we realized that we needed an infusion of happiness—right now.” Her kids were so surprised when they brought Pepper home, that her daughter asked, “Is that a real dog?”

The family had been considering getting a dog for about a year, but was hesitant to do so with their busy lifestyle. Their middle child was the one who had been consistently and persistently asking for a dog. She pointed out that this—meaning the pandemic—was the best opportunity to be home with a puppy. “I’ve literally been waiting 10 years for this day to come,” says 10-year old, Nava.

Since the children’s school—Krieger Schechter Day School—had moved to an online learning environment, mom Rachel Siegal had been exploring the pet possibility with renewed vigor.

“When I heard the essential-services-only executive order was coming into effect at 5 p.m., I told myself it was now or never,” Siegal says. “I went and met the puppy by myself at 1:30, leaving the kids at home with my husband, Sam.” (She had learned her lesson from a previous puppy encounter earlier in the week, when they all went and the kids left brokenhearted when she decided that particular dog wasn’t right for them.)

“When I met this puppy I had a sense that she was the one,” says Siegal. After meeting the entire family later that afternoon, the new pup was settled in her new home before the executive order went into effect that night.

“We borrowed some puppy supplies from neighbors, did a curbside pick up order from Petco, found Joy Freedman, a trainer who was willing to do online virtual trainings with us as a family, and we were off and running,” she says.

The Sandhu Potter family had been talking about a puppy for a while, given that their last rescue, Freddie, is 17. “We thought we’d do it after she passes,” says Kiran Sandhu. “But since she’s still going pretty strong and we are all home now, we decided to take advantage of the time.”

Hodja, a “probably” collie/corgi mix, is named after Nasreddin Hodja, a Turkish satirist from the 13th century. “We used to read his stories to the kids when they were little,” says Sandhu.

Another big motivating factor for the family was giving the kids something to focus on that isn’t a screen.

“It’s been great having the time to dedicate to a puppy,” says Sandhu, an ESOL educational associate with Baltimore City Public Schools. “I’m not sure how we could have done it with our normal schedules.”

Klaitman agrees it’s a wonderful distraction and way to fill time. “Pepper has been such a wonderful diversion for us,” she says. “And yes, she has succeeded in increasing our happiness exponentially.”

The same is true in the Siegal-Andorsky household. The first day, they filled up a wall in their hallway with Post-It notes covered in possible names for their puppy. Over the course of the second day, they eliminated some names as her personality started to emerge.

Their 13-year old son, Yoni, wanted a nature-based name, like Storm or Ash, reflective of Josie’s merle coat. “We didn’t want to do a name that was anything reminiscent of coronavirus or of this terrible time for our world,” says Siegal.

After day two it became clear that Josie Moon was the name that best suited her chill personality.

“I like to think of her as an old hippie come to our family to help chill us all out,” jokes Siegal. “It’s also been great to have her around for those 15 minutes here and there when the kids have breaks between their Zoom classes. Rather than watch one more YouTube video, they’re coming downstairs to the kitchen to play with the puppy,” she says, mentioning, “That’s not to say they’re not watching hours and hours of YouTube and Netflix—which they are—while Sam and I try to continue to work.”

Says Klaitman, “The kids call her their ‘emotional support dog.’ To be honest, so do the adults. We love our ‘pandemic puppy’ and know that she will help imprint some delightful memories from a difficult time.”