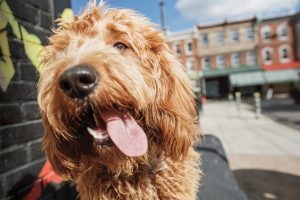 My husband would tell you that I manipulated him into getting a dog.

He’s right. One afternoon in June, I was in my new home office (my bedroom — but add a desk), flicking through Instagram, when I saw a post about how anyone can volunteer to walk rescue dogs at Doggie Style Pets,  a shop around the corner from my Queen Village home. It was one of those weeks of the pandemic where it was particularly hard to make sense of all that was happening in the world. What’s more, I had just received an email confirming that my oldest daughter’s summer camp was officially canceled. So this small piece of new information? It felt like a sign. The idea of walking a dog seemed like going out for ice cream — a mini delight everyone in the family would enjoy. I immediately went to the website for Saved Me (the adoption agency run by Doggie Style) and signed up for a 30-minute slot for the upcoming Saturday. Like all kids ever, my two young daughters have been begging for a dog for ages. Finally, in a year with precious little of it, there’d be some good news to deliver.

We planned our Saturday around the appointment. I insisted my husband come along, having a sneaking suspicion that the second he saw the girls smothering the dog with baby talk and love, his resolve would crumble. It worked. We leashed up Minnie, a sweet three-month-old pit bull mix. By the time we reached the end of the block, my husband and I were having a full-on silent parent conversation, exchanging lots of knowing looks, head tilts and “C’mon” hand motions. He was hooked.

For a variety of reasons, it didn’t work out with Minnie. (As one friend said, “It’s easier to get into Harvard than it is to get a rescue these days.”) But by Monday morning, my husband was texting me links to nearby cockapoo breeders. We went from telling the girls “We’ll talk about it when you’re older” to putting a deposit down on a puppy in a week. Not long after I had given away the last of our baby stuff, I found myself once again installing safety gates at the bottom of our stairs. I’ve never considered myself a dog person. You know the type — they can’t help but comment on every pooch they see, bring their own pups on vacation, wear fanny packs stuffed with treats. (My dad is a capital-D Dog Person. He used to tote gallons of water from his home in New Jersey to his place in Florida so my family dog could “ease into” the tap water down there. Seriously.) I adored my childhood pet, but as I got older, I saw dogs less as lovable companions and more as to-do lists with fur: something to walk in the rain, take to the vet, stress about. Still, as the pandemic rolled on without an end date in sight, I got fixated on the idea of getting one. With everyone home and nowhere to go, the timing was right. A new member of the family could inject some much-needed happy energy into the house. (Kinda like having a new baby, but without having to save for college.) And after all of the missed birthday celebrations, virtual-schooling arguments, financial stresses, fights and tears and virus anxiety, joy was something we needed. So that’s how we got Penny, the world’s greatest dog and my new favorite child, a 10-pound chocolate brown wavy-haired furball who follows me into the bathroom. But look around, and you’ll see that my story is one of a million. Philly is booming with puppies and newly adopted dogs these days. My Instagram feed is full of friends making “new member of the family” announcements, my vet is booking appointments a month out, and there’s more dog poop on the streets than usual. (And that’s saying something for Philly.) Rachel Golub, manager of adoptions at the North Philly location of the PA SPCA,  says they’ve had a hard time keeping up with the demand to adopt rescues. In the spring, Golub’s office started fielding hundreds of application and inquiry requests a day: “As soon as we would get down to 100 emails, 100 more would pop up,” she says. Due to COVID and logistics, they haven’t necessarily had more rescue dogs available to adopt, but the ones they do get in are finding new homes remarkably quickly. The number of dogs that were adopted by the families who were fostering them has also skyrocketed: Between January and September, 79 pups took up permanent residency with their foster families; in the same period in 2019, that number was only 10. Melissa Levy, executive director of the Philadelphia Animal Welfare Society. (PAWS) — the city’s largest rescue partner — has seen the same thing. For the first time ever, she says, PAWS has more people interested in adopting and fostering dogs than it has actual dogs.