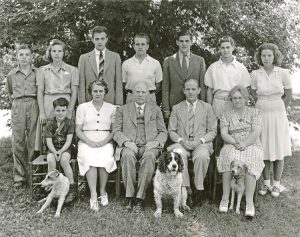 Like many cultural organizations and businesses, the Otter Tail County Historical Society has currently shut its doors to the public to comply with social distancing and keep people healthy. The staff is working at home while also taking care of duties that do not involve personal contact with the public. We hope the public is aware that while the museum and research library may not be open, we continue to care for the precious artifacts and archival materials – priceless photographs, books, newspapers and one-of-a-kind records – that tell the story of Otter Tail County.

During the first weeks of the museum closure and stay at home order, I was pet sitting my son’s darling cat. His friendly nature and feline hijinx brought me comfort and joy in a trying time. Even now he participates when we FaceTime with my son at NDSU.

The idea of indoors animals, piles of pet toys and FaceTiming a cat would seem like foolishness to our distant ancestors. For them, animals had a purpose whether it meant a dog pulling a Dakota travois or herding a flock of Latter Day Saints’ sheep.

Ann Whiting Barnard was a member of the Cutlerite Mormon Colony that came with sheep to Otter Tail County by covered wagon in 1865. She described the journey from Iowa with her parents and seven siblings in the “Old Clitherall Story book”. Barnard wrote, “the only real heartache I remember was when we drove off and left our little dog Ring behind. He had been our little playmate for so long that to see him sitting there wagging his tail and watching and listening for an invitation to go with us made the big lumps come up in our throats.”

On that same trip, Ann’s mother was surprised to discover a snake curled up in the Dutch oven she used for baking bread. How shocked would Mrs. Whiting be to know the infinite variety of reptiles, insects and spiders that people keep as pets today?

Stories and photographs that include beloved pets are some of our Historical Society staff favorites. A longtime volunteer at the museum and the Center for the Arts was a well-known cat lover. We treasure photos of Jan Stenger as a toddler with her pet kitties. She famously doted on her fur babies.

One famous furry resident of Fergus Falls was “Jack” Brown, who belonged to James and Mygatt Brown. Mr. Brown practiced law and Mrs. Brown was involved in organizations such as the DAR and Women’s Study Club. The couple had no children and doted on their fur baby, Jack. They even held a birthday party for the little fellow. The first emotional support animals in the county may date back to 1981 when State Hospital rehabilitation workers Sharon Loyce and Debbie Wahl began pet therapy sessions for residents in a partnership with the Otter Tail County Humane Society. Then, as now, we turn to our pets for safety and comfort. Stay healthy, stay home and pet your pet.