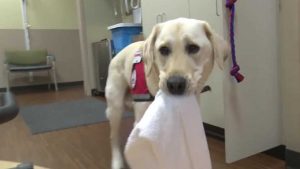 Going to the hospital can be a scary experience, but one member of the team at UofL Hospital goes above and beyond to put patients at ease.

“They come in, they’re a little bit afraid, Travis comes in and it just changes the whole mood of the patient,” physical therapist Cathy Gerrish said.

Travis is the hospital’s three-year-old facility dog. He’s part Labrador, part golden retriever and was trained as a service dog by an inmate at the Kentucky Correctional Institution for women through the Paws for Purpose program.

For nearly two years, Travis has worked at UofL — complete with his own photo ID badge — helping patients with their physical therapy exercises.

“He is so chill, which is actually an ideal thing for this rehab setting,” Gerrish said. “He knows when he needs to tuck under a desk to get out of the way. He really is perfect for this environment.”

Through a previous WLKY story, online pet store Chewy learned about Travis’ important work and wanted to donate some items to help with his care. For Gerrish, who not only works with Travis but also cares for him and pays for expenses, the gesture was a blessing.

“I felt like I won the lottery. I was just giddy when I found out that they wanted to donate something,” she said.

Representatives from Chewy delivered the items Thursday, wheeling in a new bed along with a wagon full of toys, treats and other goodies for Travis to enjoy.

Gerrish was thrilled to see his tail wag as he sniffed and squeaked his new toys, but brought to tears to see him recognized.

“It makes me a little teary-eyed,” she said. “He’s given so much to the patients here. This is huge he’s being recognized.”