Paws In The Park 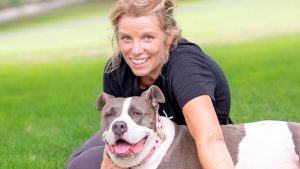 Tails are wagging for the 18th annual “Paws in the Park” fundraising event, which the Rhode Island Society for the Prevention of Cruelty to Animals will hold Sept. 26.

The walk was set to take place at an East Providence park but has now morphed into a virtual extravaganza, as restrictions on crowd sizes remain in place due to the coronavirus pandemic.

But Connie Kile, who is the director of development and community relations for RISPCA, told NBC 10 News that they have some new ways to raise funds and awareness for shelter animals and are asking participants to register online as soon as possible.

“We always had the idea in our heads that if something happened, we’d have to pull this back to a virtual event, so we’ve been brainstorming new ideas and fun things we can do,” Kile said during a phone interview Monday.

RISPCA President Joe Warzycha agreed. He said while it wasn’t an easy decision, it was necessary.

“After closely reviewing the State COVID-19 Control Plan for outdoor events, it became more apparent that the logistics required to safely and effectively host this event would be far too challenging with our available resources,” Warzycha noted in a press release.

“We had further concerns that the number of required restrictions would potentially inhibit our attendees from the ability to fully enjoy the event and take advantage of all the opportunities presented,” Warzycha added.

Instead, they will be having fundraising contests online each week leading up to the big day.

As opposed to a raffle, they will be holding interactive games on Facebook and Instagram and giving away prizes to the top winners.

“We’re planning on heavily relying on social media,” Kile said. “People can record themselves and post an Instagram story of them doing the game and then enter to win.”

On the day of the event, they will host a live stream at the shelter through their website at RISPCA.COM, as well on their Facebook page.

“We’re going to have a bunch of activities that we’re going to do at the shelter,” Kile said. “Some of it will be live and interactive.”

The live events include demonstrations with the Rhode Island State Police, as well as the shelter’s annual Halloween costume contest.

“We’re going to set up a page on Facebook and whoever gets the most likes wins,” Kile said. “And then we’re going to do a parade for them.”

Melissa Marszalek, who is a volunteer for RISPCA, as well as Providence Animal Control, will also be on-hand with her dog, Willow, a 5-year-old therapy dog from Riverside.

Since then, she has been helping to raise awareness and funds for the cause.

Through a recent photo contest that RISPCA held online, Willow helped raise $4,428 for the non-profit organization.

In total, contestants raised more than $14,000, with participants donating $1 per vote.

Now, Willow is helping RISPCA promote all the virtual events.

“This is what Willow was born to do,” Marszalek said. “She loves being around people and to her, it’s not just going to be one day. It’s going to be six weeks of doing different things each week and meeting people in small group settings. There’s going to be so much fun stuff. Willow and I make a great team and whatever they ask of us, we’ll do.”

Willow is a therapy dog, receiving her certification from Paws From the Heart. She is a member of the PVD Pups Program at T.F. Green Airport in Warwick, with her presence helping to calm and soothe passengers.

But Marszalek said she understands that not all dogs are as social as Willow and that’s why virtual events will give all pets and their owners an opportunity to enjoy themselves in the comfort of their own homes.

“I like the fact that everyone can participate,” she said. “Sometimes, that setting is too much for some dogs. All dogs are different. Willow happens to do well, but my other dog, Ivy, would just melt away and be so upset if I brought her to an environment with so many people and dogs. This gives them a chance to do something fun with their community that’s not in a large group setting.”

Kile added that they are hoping to reach a goal of $30,000 after raising $20,000 in 2019. Funds help support its critical community programs and services including pet adoption, animal cruelty investigations and rescue and safety-net community programs such as hardship boarding, emergency pet food distribution and medical assistance.

In the meantime, she is encouraging people to register online.

“We’re really trying to get people to register right now so we can start running some of the contests,” Kile said.