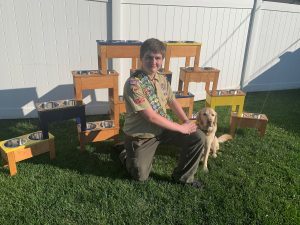 Luke Tordy says his service dog, Dragon, reconnected him with his life. His family agrees. But such a simple statement hardly seems adequate to describe the wholesale transformation that has taken place since Santa-Rosa, Calif.-based Canine Companions for Independence (CCI) brought Tordy and Dragon together.

Since receiving Dragon in 2017 to help with emotional and social adjustments, Tordy has sought ways of giving back. In 2018, he broke fundraising records, giving CCI $5,000 in advance of the annual DogFest Walk ’n’Roll celebration. This year, the Covid-19 pandemic has prevented CCI from holding a live gathering, but the event will still be held virtually, on Sept. 12. Dogs from Nassau County will be put through their paces, and new pairs of dogs and companions will be introduced.

In anticipation of the event, Tordy and a team of volunteers made stands for the dogs’ water bowls. “It was part of my Eagle [Scout] project,” Tordy said. “I originally thought we could do it in just a couple of days. But because of Covid, I could only have one or two people over at a time, so it ended up taking about two weeks.” The Wantagh High School junior expects to receive his Eagle Scout award in about two months and said he is filing the paperwork next week.