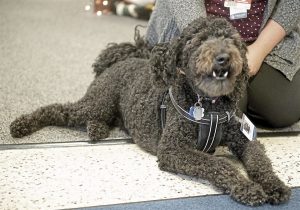 The curly-haired Labradoodle sits next to the reception desk near the entrance of Shaler Area High School. She’s still as a statue, except for her tail, which wags nonstop as students hustle and bustle through the hallway.

When people stop to pet the 42-pound dog, that tail wags even harder. The laminated badge she wears on a harness identifies her as Pepper, a certified therapy dog.

Pepper, 4, officially reported to her first day of work on Dec. 3. She comes to school two or three days a week with LeeAnn Guido, a licensed social worker who has worked there for 15 years.

“I thought Pepper would be a calming influence and might help students to open up” during counseling sessions, said Ms. Guido, leader of the school’s Student Assistance Team.

Shaler students can get counseling for drug and alcohol problems, family problems, general mental health and peer issues, including bullying. Ms. Guido also works with students who are homeless or are transgender.

Pepper has been stellar in counseling sessions, she said, and she has gone beyond that, bringing comfort and joy to the larger school community.

Susan M. Strackhouse calls herself Pepper’s No. 1 fan. The administrative assistant’s gaily decorated reception desk is next to the counseling office and the carpeted alcove where the dog hangs out.

Staff and students often stop by to pet Pepper’s soft and wooly coat. They walk away with smiles on their faces, Ms. Strackhouse said.

“Pepper has been good for everybody,” Ms. Guido said. “She is calm and empathetic.”

When someone lingers, Pepper has an endearing move: She trots back to Ms. Guido’s office and retrieves a large plush toy to present to her visitor.

There are lot of little success stories.

“A boy who was having a bad day stopped by. He sat on the floor with her for 5 minutes, petting her. He said he felt better and went on to class,” Ms. Guido said.

Pepper gave a student who struggles with truancy an incentive to come to school. She has helped another student overcome a fear of dogs.

Four years ago, when Gabriella was 8 years old, she was diagnosed with juvenile diabetes. It was a difficult time for the family, and Ms. Guido and her husband, Brian, eventually decided to get a puppy for their daughter.

The family was impressed with how well Pepper got along with people of all ages at large summer parties at their home in Lower Burrell. They thought she would be a good therapy dog and that Gabriella might want to join her.

The family started the training in November 2018 by bringing the dog to the high school in the summer, when students and teachers weren’t there, to acclimate her to the building.

Ms. Frick makes regular therapy visits with her own six dogs, including three corgis. They are part of the Thera-Paws program of the Westmoreland County Obedience Training Club.

Pepper and her family passed the evaluation on their first try last summer. Then Ms. Frick observed them as they visited two nursing homes and a school. Gabriella and her parents are now certified to handle Pepper at therapy dog visits.

Ms. Guido also won the approval of the high school principal, the school superintendent and the school board.

I’ve met many wonderful therapy dogs, but Pepper is the first dog I’ve seen assigned to a high school counseling office. Shaler Area officials are to be commended for letting this dog work her magic in their school.

Ms. Frick says there are a number of testers in Allegheny and Westmoreland counties and parts of West Virginia.