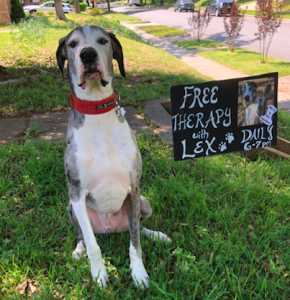 Lex, a rescued Great Dane, and his owner Jennifer Neily have been a therapy team for about four years.

They often visit CC Young Senior Living but haven’t been able to attend since the coronavirus hit.

It was clear Lex missed his work, Neily said.

“We’d go for walks about every day, and he’d just go up to people in their driveway,” she said.

In mid April, Neily put Lex back to work outside their home on Belmont Avenue between Skillman Street and Abrams Road.

The pair sit outside from 6-7 p.m. and provide free therapy for anyone who wants to stop and say hello.

“He just eats it up,” Neily said. “We have some regulars who stop by. If someone doesn’t want to say hello, his feelings get hurt.”

The pair will continue “until the heat gets too unbearable,” Neily said.