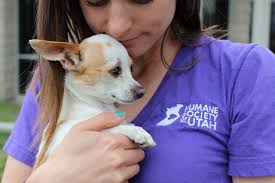 People have shown an increased interest in fostering rescue animals since COVID-19 has prompted many to stay at home.

The foster program focuses on placing animals into a healthy home environment and is ideal for animals who are recovering from an illness, taking medication or going through post-surgery recovery.

“The shelter is not a place to house animals for a long time. They’re at risk for being exposed to illness or behavioral decline,” Shepherd said. “Our foster department is vital to getting them in a home environment where they can rest, recover and grow.”

Lisa Dixon is a BYU senior graduating this month from the School of Family Life. She and her husband, Bradley Dixon, recently adopted their foster cat, Zamboni, from the Best Friends Animal Society in Salt Lake City.

“Our foster ‘failure’ as we call her, is named Zamboni because my husband and I really love hockey,” Dixon said.

The term “foster failure” is used to describe animals that are originally taken in as fosters and turned into adoptions. Zamboni was taken in as a foster alongside another cat named Sassy.

“As soon as Zamboni got acclimated to our home, we knew we wanted to adopt her because of how playful and chill she was,” Dixon said. “In regard to the other cat they gave us, Sassy, she ended up not getting along with Zamboni, so we actually had to take her back.”

Dixon said fostering is great because it gives the potential owner a “test run” before committing to an adoption.

Having Zamboni while being in self-isolation has benefitted Dixon’s mental health and emotional well-being.

“I think the whole ‘emotional support animal’ deal has been kind of made fun of and trashed in the media lately, but think of how much joy it brings you when you see a dog or cat?” Dixon said. “I personally have really bad anxiety, and with everything basically hitting the fan in recent weeks because of the pandemic, having a pet to refocus my attention to has been extremely beneficial.”

Not all animals have been as lucky as Zamboni in finding a permanent home. According to Shepherd, the number of pet adoptions have decreased since the onset of the pandemic.

“The one thing that has affected us with the pandemic is needing to be socially distant, which means we can’t allow people in our facility,” Shepherd said. “We’ve had to go to appointment-only services.”

The Humane Society also had to cut down their selection of available animals because so many were unable to meet the requirements for adoption. According to The American Society for the Prevention of Cruelty to Animals (ASPCA), “dogs and cats must be sterilized before adoption, or adopters must enter into a sterilization agreement.”

Since the governor’s order to preserve personal protective equipment (PPE), the Humane Society has not been able to do elective spay and neuter for animals in the community.

“It’s definitely hurt the animal welfare industry because we’re generally used to helping hundreds of animals a week,” Shepherd said. “We’re just not able to take in those animals and do those services.”

Salt Lake County Animal Services has also experienced drawbacks but has been able to continue functioning because of the community support it has received. Callista Pearson, the organization’s marketing and development manager, said the shelter has been operating at almost full capacity despite all the changes to their procedures and protocol.

“Since March 13, 91 pets have been returned to their owners, we’ve adopted out over 50 pets, we currently have 80 pets in foster homes and over 100 animals have been sent to rescues where they will be adopted out,” Pearson said. “The outpouring of support from our community whether it be fostering or sending enrichment supplies for the pets living in the shelter has been amazing.”

While adoptions are limited, they are still happening. Interested individuals can start by calling their local animal shelter or going online to view a list of available animals and filling out an adoption profile.

Dixon has enjoyed the company of her adopted cat but also wants potential fosters and pet owners to be prepared to take on extra responsibilities like cleaning the litter pan, feeding the animals and making sure they get sunlight and exercise.

“In my opinion, the benefits definitely outweigh the not-so-glamorous aspects of owning a pet,” Dixon said. She also advised people to be open-minded about the type of pets they’ll be taking into their homes.

“Zamboni is a full-grown, two-year-old cat, which is not what I expected as my first pet with my husband,” Dixon said. “We, like most, wanted a kitten or puppy. But she needed a home and love, which is what we have given her.”