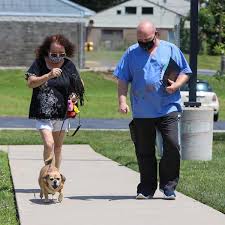 The statewide impact of Ohio Gov. Mike DeWine’s stay-at-home order issued on March 23 is undeniable. Though some were able to revel in the fact that working from home meant more time with furry friends, owners of animal-based businesses were hard at work trying to adapt.

Karen Stalnaker, owner of Karen’s K-9 Klips at 3499 Route 59, has groomed dogs for about 41 years, 22 of those at her current location in Ravenna. She mainly sees clients from Ravenna and Kent but regulars have traveled to her from as far as Solon.

Stalnaker said she was forced to close her business from early April to about mid-May. After those six weeks, she “had a mess” when doors reopened.

“My dogs were all real long and late,” she said. “Some people tried to clip their own dogs. Oh my goodness, I had to straighten out messes.”

Aside from the time her business was required to close its doors, Stalnaker said COVID-19 has not otherwise disrupted her business. For a while, she needed a friend to help her bathe the dogs in order to catch up with her client’s demand. Only recently has she reached a point where workflow has returned to normal. Typically, she grooms seven to eight dogs a day.

Because she is the only permanent employee, Stalnaker said not much foot traffic goes in and out of her business. Contact is also minimized by the crate system she uses for pet pick up and drop off. Customers place their dogs in one of the crates set up in the lobby. Stalnaker places them back there once grooming is complete. Sanitizer is also set up around the space and customers have to wear masks when in the building.

Stalnaker said her biggest concern is being forced to close again. Should another statewide shutdown occur, she is an advocate for pet grooming to be classified as an essential service. Her reasoning for such was based on the comfort of the dog. Without proper grooming, fur becomes matted and toenails become overgrown.

Nancy Brown, the “alpha dog” at Double Dog Day Care at 3770 Fishcreek Road, referred to her business as “niche.” The Stow-based facility offers dog daycare but not overnight kenneling. Grooming and in-home pet care services are also available. Though clients typically utilize the latter during vacations or long work days, home visits have sharply declined since the statewide shutdown earlier this year.

Double Dog shuttered its doors from late March to mid-May. Despite the temporary closure, the daycare aspect of the business has seen numbers typical for the summertime. Brown explained that summer is not a popular time for dog day care services because pet owners are home, the weather is decent and dogs are able to play outside.

The busiest time tends to fall around January, February and March. In fact, she said, the first quarter of 2019 was the best ever for Double Dog since it opened in January 2011. Brown said she accepted there was a real possibility that her business may not have survived the shutdown. She considers herself fortunate.

Brown’s business has been impacted by the fact that people are working from home and they’re not traveling as much. Still, she said, the need for a dog day care service is there. When her business reopened, all of her regulars returned, she said. Though most were working from home still, they wanted their dogs to attend daycare at least three days a week.

Customers have been mindful of social distancing while dropping off and picking up pets. Double Dog has always kept its space clean, Brown said, but staff is even more mindful of cleaning even the surfaces they lean on. High-contact surfaces such as phones and doorknobs are also wiped down several times a day. Staff also follows safety protocols such as taking temperatures, wearing masks and washing hands.

“We don’t have the dogs wearing masks,” Brown joked.

Memorial Animal Hospital at 2222 Route 59 in Franklin Township, like other veterinary businesses, remained open throughout the shutdown. However, for about two months, it was only able to provide emergency and illness-related medicine, according to Jason Beutel, who manages the practice. Those restrictions lasted from mid-March to the end of May. During that time, the hospital stopped providing wellness visits.

No clients are allowed in the building with the exception of end-of-life discussions and procedures, Beutel explained. For all other services, workflow has been slowed because business has been largely conducted by phone.

Clients call reception from the parking lot and a veterinary assistant writes down the animal’s history before collecting the pet from the parking lot. Doctors then typically call the client to relay information and decide the next course of action. Once everything is done, the pet is returned and payment information is taken over the phone.

Both have since largely returned to full staffing, Beutel said.

Beutel said he does not think pet owners are delaying routine care. In fact, Memorial Animal Hospital is working through a backlog of clients. People want to bring their animals in while they do not have to maneuver around work schedules, he said.

“All of the local veterinarians are doing the best they can to be there for when they’re needed for either illness or wellness visits,” Beutel said. “A lot of people have been very understanding and patient of the changes in the routines of what veterinarians have had to go through.”