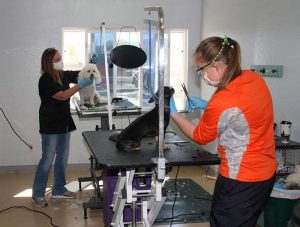 After Colorado lifted restrictions, pet grooming businesses reopened in Montezuma County and are booked with customers needing a trim.

At Cortez Animal Bed and Breakfast, owner Kelly Spruell said her regulars are coming back in to board and groom their pets.

“The phone’s been ringing off the hook, and the appointment book is filling up,” she said.

The staff is following Colorado’s COVID-19 prevention guidelines, including wearing masks, disinfecting surfaces, hand-washing, and instructing customers to stay 6 feet apart. Groomers will be pampering eight to 10 pets per day.

“They’re coming in a little shaggy. We’re excited to reopen and get them looking their best,” Spruell said.

As an animal care facility, the boarding portion of Cortez Animal B&B was considered an essential business and was able to stay open under the previous stay-at-home order issued by Colorado.

However, because of travel restrictions, nobody was boarding, and Spruell took a big hit to the mainstay of her business, she said.

Normally, March and April is a busy time as she boards up to 80 pets for people on spring break. But this year, she had just a few because nobody was traveling. Boardings are starting to rebound.

The monthlong forced closure was “tough for business, but also rewarding,” Spruell said, because they were able to do some renovations, painting and deep cleaning. Being awarded the Paycheck Protection Program was a relief, and she kept her staff working on renovations.

In Dolores, Mudpuppies Pawshoppe also reopened, said owner Molly Wolf, and is booked solid for grooming, with a waiting list of 90 clients. Staff have been rehired.

Wolf has implemented precautions to protect against the spread of COVID-19.

To ensure 6-foot distancing, a fenced entrance was installed where customers drop off their pets, return to their car and honk. Only the animal is allowed indoors for the grooming. Payments are dropped off at an outdoor station.

The shutdown hurt her business, Wolf said, but it was also “a good break. We got a lot of projects done, did a lot of cleaning. We’re very happy to back working.”

Regarding their views about the state restrictions during the pandemic, both pet business owners said they did not want to comment because the issue is too controversial.

In La Plata County, the San Juan Basin Health Department elected to be more restrictive than the state and delayed the opening of pet grooming facilities until May 8.

And dog groomers were scratching their heads wondering how they got lumped in with salons, barbershops and tattoo parlors in business restrictions designed to slow the spread of COVID-19.

“I have no idea why they decided to restrict dog groomers. I can understand human grooming – you’re working around the face, that’s different. But dog grooming? There’s not much difference between hauling a bag of dog food to someone’s car or picking up their dog,” said LeeAnn Craig, owner of Healthy Hounds & Fat Cats in Durango.

Craig estimates the pet service segment of her business, which includes pet boarding, doggie day care and a self-service dog wash, is down 90% since restrictions on commerce were put on place to slow the spread of the novel coronavirus.

Lou Galinson, owner of Pet Haus in Durango, said it would have been nice to have opened his grooming service sooner than May 8, the opening date allowed under San Juan Basin Public Health’s Safer La Plata order.

“There’s not a whole lot of interaction going on with people when you’re grooming a dog,” he said.

As an essential business, the retail operations at Pet Haus and Healthy Hounds & Fat Cats have been allowed to remain open during COVID-19 restrictions. But both Craig and Galinson had to close their grooming services, and they said allowance for their continued operation would have been helpful in these economically stressful times.

“We would have picked up dogs. We absolutely could have taken steps to limit interactions with people,” Galinson said, if he would have been allowed to operate his dog grooming service.

Claire Ninde, spokeswoman for the health department, said the agency did not categorize nonessential businesses based on their risk to spread COVID-19 (among humans) and made no distinction between barbers, hair stylists, tattoo artists or dog groomers.

SJBPH used the governor’s and Colorado Department of Public Health and Environment’s categories and guidance and simply extended out the dates for opening of specific businesses from May 1 and May 4 in Polis’ order to May 8 in SJBPH’s order.