Pet Groomers, Retailers Go Contactless To Do Business During COVID-19 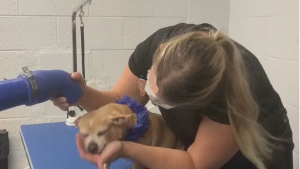 Carol Nihanu and her service dog Hoku are regulars at Live Love Pet in Kaimuki.

Before reopening, shop owner Krystal Hensley made changes she hopes protects both her clients and employees.

“She paid a lot of attention to detail and the safety of the animals as well as the owners,” Nihanu said. “I like that and I appreciate that.”

Hensley’s testing a contactless system where clients don’t come into the shop to drop off their pets. She also installed new kennels and increased spacing between grooming areas.

Under the state’s stay-at-home order, businesses critical to pet health are considered essential, but Hensley says she called the Mayor’s office and the city hotline and was told pet grooming services are not essential. KITV-4 reached out to the Mayor’s Office but have not heard back.

Hensley said she wanted to follow the law and closed her store, but was upset to see other local pet salons remain open and big chains like Petco and PetSmart continue their grooming services. She and Nihanu believe it put the public at risk during the early days of the pandemic. But now they say it’s time to reopen.

“We need to get back to doing what we love. People don’t see their dog as a dog but as their child, by not letting them get their dog groomed, you’re taking away their ability to cope,” Hensley said. “A lot of people see dog grooming as a novelty or something that only the rich can afford, it’s not true at all, because the health of your baby is most important.”

For Nihanu, the service is essential.

“I have really bad arthritis. I can’t bend my knees. So I can’t even put him in a tub to bathe him. I have arthritis in my shoulders. So if I didn’t have a groomer that was reliable, I would not be able to care for him as he needs to be cared for,” she said.

One-on-one interactions in retail settings will be harder, but some local shops are adjusting. Simply Organized in Kahala Mall, for example, is offering a “Buy Online, Pick Up at Store” service. Customers can buy products at simplyorganizedhi.com and pick up at the store Monday through Saturday from 11 a.m. to 3 p.m. Customers can also call the store at 739-7007 to make requests for items they don’t see online.

Doing business without contact might seem counter-intuitive and strange in Hawaii where touching is as common as breathing, but it’s what companies are doing to protect the community once the economy reopens.