Pet Of The Week 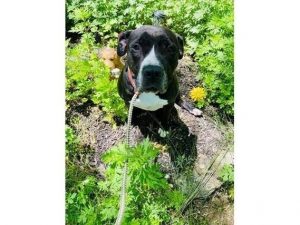 The “lovable” Betty Boop was named the Smithtown Animal Shelter’s Pet of the Week. She is an 8-year-old medium-sized female pit bull terrier mix.

Betty Boop was found wandering around a nearby train station and brought to the Animal Shelter by a Good Samaritan.

“This sweet girl is the ideal therapy dog!,” the shelter said in a news release. “From your first introduction, she becomes instantly attached. You’ll find it hard-pressed to walk away. Betty Boop is very laid-back, great on a leash, and a stage five clinger on the couch. She does have some arthritis issues, but this is manageable with a little bit of extra care and attention. Betty Boop would do well in a home with children, but deserves to be the only pet in the family.”

She was named after the iconic cartoon diva — who was originally designed as a dog.

Betty Boop is the “perfect combination” of calm, affectionate, and sweet, according to the shelter. She weighs 70 pounds.

If you are interested in meeting Betty Boop, please call ahead to schedule an hour to properly interact with her in a domestic setting, which includes the shelter’s Meet and Greet Room, the dog runs and the Dog Walk trail. Family Pet Meet and Greets and at-home interactions are also welcome and an integral part of the adoption process.

Due to the coronavirus, the Smithtown Animal Shelter has had to restrict public access to confirmed adoption appointments and animal/wildlife rescue. Hours are currently Monday to Saturday from 10 a.m. to 3 p.m. Sundays and Wednesday evenings are by appointment only.

To inquire about the Pet of the Week or to meet your potential soulmate, call the Smithtown Animal & Adoption Center at 631-360-7575.

The Smithtown Animal Shelter’s primary concern is finding the perfect home for each animal that finds his/her way to it. The Animal Control Officers at the Smithtown Animal Shelter will go out of their way to ensure both the rescued and rescuer are made for one another. If you have other pets, you can arrange to bring your four-legged family member into the shelter or they can set up an at-home meet & greet to see how your prospective new addition does with other family members, pets or the household itself.

The shelter is also seeking foster volunteers. Foster parents provide temporary care for cats, kittens and dogs in their own homes. Some animals need as little as two weeks of care, while others may need care for extended time.