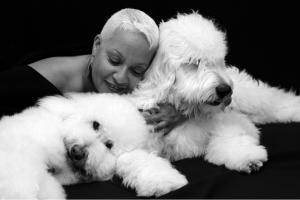 For millions around the world, life during this pandemic has become the “emotional strain of the century.” Regardless of how we discern our level of stamina, mental fortitude or faith, the demonstrative toll these past months have truly exposed everyone’s frailty — at least once.

Having a pet in your home brings a certain level of serenity to this chaos that surrounds us. Pets eradicate the loneliness we feel due to social distancing and can erase the foreboding clouds of change we fear could easily be around for an indefinite period of time. Living with therapy dogs during this COVID-19 season has increased my clarity regarding the powerful impact their presence provides to us humans.

At 92 years of age and battling dementia, my mother and my then three-year-old Goldendoodle Harley, forged a Velcro-type relationship that lasted until her death at the age of 97.

My mother didn’t like dogs, but she was enamored with him. Harley remained by her side when she was with us, exaggerating his movements to her benefit. He was cautious and attentive, patient and loving.

Their delicate relationship both inspired and motivated me to pursue pet therapy. Tail-wagging tutor programs and living assisted facilities occupied our days until we moved to Charleston. Acceptance into the Medical University of South Carolina’s Pet Therapy Volunteer Program was a dream come true. Eight-year-old Harley and I would roam the halls of the Children’s Hospital Tuesday mornings, making friends with patients, family members and of course medical personnel.

In 2018, I accepted the Pet Therapy Coordinator’s position and felt blessed to participate in one of the most rewarding opportunities of my life. Both Harley and Jaxson (my younger certified Goldendoodle) accompany me to work. They each work two days a week, and I keep one day to myself.

In less than two years the program increased from 32 therapy dogs to more than 90. Dedicated volunteers Uber their incredible dogs regularly to dozens of facilities both on and off-campus. The halls of MUSC are filled with tail-wagging happiness every day.

On March 27, our fluffy pawed volunteers were asked to exit all buildings due to the pandemic. Ten days later, Harley, Jaxson and I were temporarily furloughed. I understood, but they were thoroughly confused. Each morning after breakfast, instead of grabbing a leash and car keys, I made coffee in my slippers and sat down to watch CNN. I can only imagine what raced through their heads.

Up until now, their daily routine involved constant interaction with dozens of people. Harley spent most of his time between pediatric pre-op and adult NSICU. He’s a professional at snuggling and calms humans of all ages. Jaxson is excellent at lowering blood pressure in post-acute care units and assisting recreational therapists with stroke rehabilitation patients.

As weeks rapidly became months, I slowly realized how much my husband and I relied on them as our paw-sonal therapists. They restructured the mundane lifestyle we were forced to adopt. Even as a steadfast optimist, I experienced those exasperating moments adjusting to what we’ve now labeled “our new normal.”

Our first grandchild was born earlier this year. Summer is winding down and he’s six months old already. I held him once when he was four weeks old. My husband has only seen him through photos and videos. He lives in Washington DC. We must wait. It’s simply too dangerous to travel, which at times is too hard to fathom.

Both Harley and Jaxson are masters at deciphering a human’s emotional confusion. They are gifted with empathy. Over the years I’ve observed them detect sadness, fear, and loneliness. Jaxson’s bi-weekly friendship with chemo patients has helped remove anxiety during those hours of treatment. Countless times Harley has ridden the gurney with a young child into the operating room or sat with a very anxious patient waiting for test results.

The human components in our department are scheduled to return later this month. The therapy dogs have not been cleared to restart. Work without one of them sharing my office with me will feel, well, a bit strange.

As illness, loss of life, employment and financial devastation continue to blanket our country there is some value in this valley. I believe collectively, we (as a nation) are stronger, kinder, and becoming more amenable to a simplistic lifestyle. And after 20 weeks as the recipient of canine therapeutic intervention, I am electrified with ideas on how to enhance the pet therapy program. There is much to be learned from observing your pets.