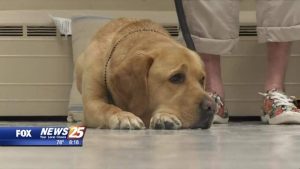 This weekend there were barks and cheers as Gulfport welcomed six new pet therapy teams.

Saturday, the Visiting Pet Teams of South Mississippi honored its 2020 class of pet graduates. Six canines and their handlers received diplomas and a chew toy for successful completion of their course instruction and their evaluation.

The ceremony was held at Gulfport Memorial Hospital. All human attendees wore masks and were spread six feet apart. While COVID-19 did not prevent the graduation event from happening, it did affect the number of graduates. Visiting Pet Teams of South Mississippi Coordinator Michael Bowin said, “We would’ve had six but we had a couple that dropped out for other reasons. And this is considered that we’ve been basically four months without any evaluations. So this was a very small year for us.”

The Pet Therapy’s team evaluator, Carla Anderson, had some parting words for her pet teams as they embark on a journey she began 10 years ago. “Those new dog handler teams, sometimes I remind them, you know, don’t drop your lead, pay attention to what your dog is doing at all times, and you’re your dog’s advocate. It’s your responsibility to remove your animal from the situation if your animal becomes stressed.”

Anderson says therapy dogs aren’t made, they’re born. A couple of the many traits she says they should have is getting along with children and not backing away from physical touch. “You can train obedience and field and agility, but you can’t train temperament and personality.” The basic duties of a therapy pet, according to the group’s motto, are to enhance lives, reduce loneliness, and create motivation through animal assisted activities and animal assisted therapy. “It’s just all about the dogs. I just joke and say I’m just the driver. They do everything. And they do, they do.”