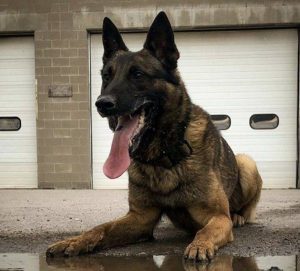 A  Peterborough woman is facing drug-related charges following a traffic stop in which Police Service Dog Chase located cocaine inside the vehicle on Tuesday morning.

According to the Peterborough Police Service, an officer on patrol in the area of Charlotte and Rubidge streets conducted a traffic stop around 9:20 a.m. that morning, after observing a vehicle failing to stop properly at a traffic light.

Police discovered the driver was currently under suspension from driving.

The canine unit also attended the scene. Chase searched the vehicle and indicated there were drugs in the area of the driver’s seat, according to police.

Lindsay Ann Musgrave, 40, of Stormont Street, Peterborough, was arrested and charged with possession of a Schedule I substance – cocaine; driving while under suspension and improper Stop – traffic signal at intersection.

She was released from custody and is scheduled to appear in court in Peterborough on July 22, police said.