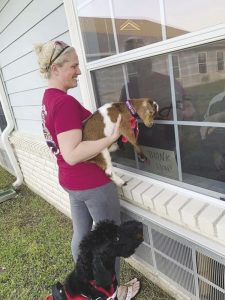 After receiving news that elderly residents were isolated to their rooms in local living facilities due to the outbreak of the novel coronavirus, COVID-19, a group of community members decided to share some germ-free smiles any way they could.

“I started brainstorming things that could be done to help, such as putting bird feeders and yard art outside their windows,” said Veronica Koliba. “Then the thought of a pet parade just popped in my head that other than family, who or what would bring joy and smiles to anyone’s face?  Duh, animals.”

Koliba reached out to Trinity Shores of Port Lavaca, and they were on board with the ideas, but pets are not allowed in the facility. That didn’t stop Koliba and her group of community members who were willing to help with the project.

Local resident Carley Stringo sent out a message on the “Six Mile Friends and Neighbors” Facebook group to recruit friends and pets.

“Some of the people on that page messaged some other friends with pets to join,” said Stringo. “There was about 13 to 15 of us. We just walked around the facility to wave and show the animals through their windows. The residents were thrilled to see the animals, and many of them left notes in the windows thanking us.”

“The residents had to get word through a memo to have blinds raised at 7 p.m. Tuesday evening because you may see a cow,” she said. “We had to ensure all of them had a means to watch as some of the rooms do not face the outside perimeter of the residence where we were allowed to parade – accomplished by a hard-working, caring staff.”

“We hoped to brighten spirits of the residents. I have a grandfather in the VA nursing home in Floresville, and he is missing us so much,” she said. “I just thought this was a way I could help someone else’s grandparent or loved one.”

Koliba reached out to Amy Mauer, who volunteered her “big fluffy dog”, and Alicia Fivecoat dressed her Shitzus in tutus. Jennifer Soefje volunteered to bring her baby goat. Krystal Krystal Stringham and her son volunteered their larger-than-life dog. Stringo brought her emotional support animal, Demi, who is a 1-year-old black Labradoodle, and she hopes to do it again.

Sarah Brumfield and her family of five also replied.

“Yes, we’ll bring a pony for sure and maybe a cow depending on her moooood,” said Brumfield.

Margaret Alvarez, Jamie Grimaldo, and her daughters, Twyla Sandberg and JoAnn Marek, also volunteered their time and pets. Twenty-two people and 11 pets made the event possible.

Koliba said the residents loved their visit and feedback from Trinity Shores was that it made them so happy.

“Our mission was to bring smiles to the residents,” said Koliba. “I think we accomplished it.”

The group is making plans to continue their pet parade even after the COVID-19 isolation is over. They have since visited other facilities in the community.