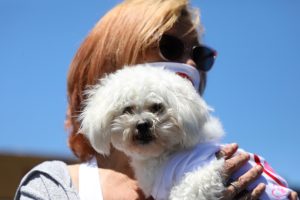 What began as a routine trip to the groomers, ended with a dog having to be rushed to surgery to save her life.

Rubber bands were tied so tightly around the small dog’s ears, her circulation was cut off and she could have died without the surgery, according to a lawsuit filed in Alameda County Superior Court this week.

The pet owner of the Maltese-shiatsu dog, named Winter, is suing PetSmart after an employee allegedly injured her dog, nearly causing the animal’s death.

On July 23 of last year, pet owner Sherrilyn Miller took Winter to a PetSmart store in San Leandro to be bathed and groomed. Miller paid extra to have bows put on her then-2-year-old emotional support dog. She even complimented the employee on how sturdy the bows looked when she picked up her pet.

But the next morning, she noticed that Winter was lethargic and liquid seemed to have been coming from the dog’s ears. It was to her “shock and horror” that Miller then noticed that the employee had attached the bows by tightly wounding rubber bands around Winter’s ears. Miller had not noticed the day before, since Winter’s fur is long and fluffy, and her skin is close to the color of the bands, according to the complaint.

“Her ears looked like black coal, that’s the only way I can describe it,” Miller said in an interview Wednesday.

Bows are supposed to be attached to the fur itself, not around the actual skin.

“Even a child knows you don’t wrap a rubber band around like that,” Miller said.

Winter was rushed to emergency surgery to try to save her life — and her ears. The bands had stopped blood flow to her ears, and both ears were inflamed and had blood blisters. The veterinarian needed to make several punctures all over Winter’s ears with a large 18-gauge needle to allow the blisters to drain.

According to the vet, Winter would have been dead in 24 hours if Miller had not noticed the problem and rushed her to the office. In another four hours, she could have lost her ears, Miller said.

Winter is traumatized, and won’t leave Miller’s side. She constantly needs attention and reassuring petting, and cries or howls if she is left alone. She’s now afraid of other people, unless she already knows them.

What Miller wants from the lawsuit is for PetSmart to change its policy and stop the use of the bows. She said it costs $3 extra to add the bows after a dog’s bath.

“Just stop doing them; it’s simple,” Miller said. “You can’t continuously hurt or kill our loved ones. … It’s not worth the $3. To me, this is so cut and dry.”

She said the groomers can use bandannas instead, and she won’t settle for anything less than their policy change.

A managing agent at PetSmart immediately admitted wrongdoing, saying that the employee was new and had undergone “expedited” training, according to the lawsuit. PetSmart paid for Winter’s medical expenses, and offered free grooming sessions.

Miller said when the PetSmart employee offered the free sessions, Winter was in surgery. She told them that that was not the time to think about more grooming sessions, and walked away.

In the lawsuit, attorney Alison Cordova of the Cotchett, Pitre & McCarthy law firm, says that since 2009, PetSmart has been accused of several instances of serious pet injury or death while under the care of groomers. In 2016, the law firm also filed a lawsuit against PetSmart after a dog was taken in for a routine nail trimming at a San Mateo location. The dog, Henry, suffered two broken ribs and a punctured lung during the trimming. Henry soon died.

PetSmart’s slogan is “Where pets are family,” but the lawsuit contends that it isn’t the case.

“PetSmart knows how important dogs and animals are to their owners. Yet we keep seeing animals get hurt and/or killed while in PetSmart’s care. And this groomer’s actions, in particular, were so far below the standard of care in the industry that it is shocking,” Cordova said in a statement.

“Imagine if a day care center sent your child home with rubber bands so tightly wound around their little ears that their ears had turned black and hard and were dripping liquid. That is what happened here, but with Sherrilyn’s dog.”

The lawsuit does not specify a certain amount for damages.

PetSmart issued a statement stating they do not comment on pending litigation.