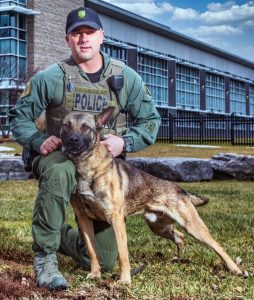 Dak comes from the same breeder in Slovakia that bred Dickson’s former dog, Zeus. Zeus worked successfully on the force for nine years, “and therefore comes from a strong, proven pedigree,” police said.

Dak was born on May 8, 2019, and is a German shepherd and Belgium Malinois mix. He started his training with the Ottawa Police Service in August 2020 before coming to Kingston.

“Dak officially started his service with Kingston Police in December and is trained in tracking, article searches, apprehension/handler protection and building searches,” police said. “He will be trained in drug and firearm detection this coming year.

Before Bask, Doak, most recently sergeant on the patrol unit, worked with four police service dogs — Scout, Bodey, Indy and Knox — between 2002 and 2014.

The force was left with one team following the retirement of Const. Mark McCreary and police service dog Titan in the summer of 2019.