Police Detain Woman’s Service Dog on Her Own Property 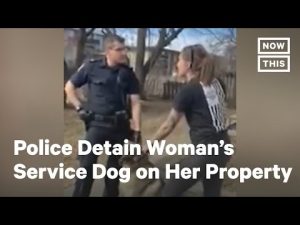 In US news and current events today, new footage shows a police officer in Canada detaining a service animal from its owner while she was reportedly on her own property. A viral video released by Freedom Media Canada shows an Edmonton, Canada, officer confronting a woman outside her home while he held onto the collar of her service animal. The officer said the dog wasn’t wearing any tags while it was on the sidewalk. The woman explained that they were on private property and initially refused to show her dog’s registration. The officer then threatened to arrest her for obstruction and confiscate the dog.